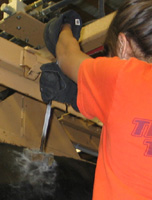 Kentland Farms is an independent farm run by Virginia Tech where all the Animal Science students can hone their skills (I hear that one student majored in animal husbandry until they "caught him at it" one day). Because it was Parents' Weekend, there were several hands-on demonstrations showing how the cows move through the various stages of their captivity. Becca and her friends showed us how to brand a cow with dry-ice, giving new meaning to the Applebee's term, steak fajitas con sizzle. I also took a brief video of one of the talking cows for all the readers who have never left the pleasant captivity of the suburbs 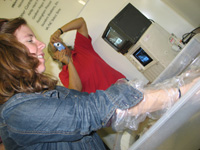 The next part of the tour allowed Rebecca to practice her ultrasound techniques on random reproductive entrails of dead cows. She was able to discover the 60-day-old dead calf in the formaldehyde, after which we went outside to look at the living baby calves, which were much cuter and fuzzy. We watched the calves play, and then observed a mama cow urinate all over her baby (I believe this is called "golden cowers").

The day was passing us by and we had to moove, so with a backwards wave, we left Kentland Farms for heifer. 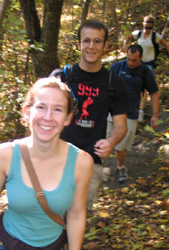 After a quick stop at the New River which was just a few more miles down the road, we went back to town and ate some incredibly tasty wings and cheesy potato wedges at BWW. We then met up with some friends of Rebecca and drove out to Jefferson National Forest near Roanoke to go hiking on McAfee's Knob. 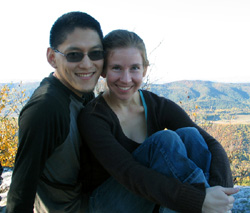 The Knob was a seven mile round-trip hike, and I was all over that Knob despite the sore throat and cold that I could feel building up in my esophagus. Foolishly, I didn't know how long the hike would be until it started. The trip up was punctuated with breaks, puppies, puppy poo, and continued exhortations of "it's just around that bend". We finally hit the summit after a couple hours of trekking, where the temperature plummeted, the wind surged, and everyone blew off the edge and died.

Once we had recuperated a bit, we wandered the summit, trying to locate notable landmarks. We could see Roanoke, and tried to see their single tourist attraction, the GIANT STAR YOU CAN SEE FROM SPACE, but failed. We snapped a few more shots (which you could see if you had a Facebook account, but which also will be posted here next Wednesday on Media Day), Sam did a handstand for his website

, and then we stumbled back down the mountain. Wisely, we took the fire road out, which was a much easier jaunt. 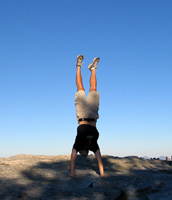 Dinner that night was supposed to be at the Homeplace, but the place was packed with parents and students and so many khaki-suit combos that it looked like a UVa fraternity invasion. A quick change of plan later and we were headed back to Blacksburg to eat at Cabo Fish Taco on Main Street, where I had the shrimp tacos.

Afterwards, Rebecca and I wandered around downtown and Squires for a bit, breaking into the carelessly unlocked Recital Salon for old time's sake, and then went home to care for my full-blown sickness.The next morning, we had a late breakfast at the Waffle House and then hit the road back to northern Virginia around 1 in the afternoon.

Happy Birthday to Anna (who is 26) and BOOTY (who is 5) and AMBER (whose birthday is vaguely around this date, so she's 3, but whose paperwork was never mailed to me by the crazy Craig's List lady we rescued her from)!