part I of II 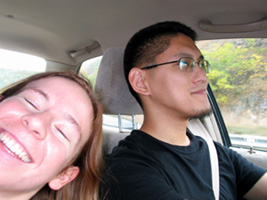 We left northern Virginia around 10:30 on Friday, after a leisurely breakfast of bacon and eggs. I-81 surprised me, because for the first time I can recall, there were no state troopers along the entire stretch from I-66 to Christiansburg. I reflexively slowed down at every cubbyhole near Staunton just to be safe, but for this one trip, the only hazards to worry about were the reckless truckers and land piranhas. Throughout the drive, we listened to XM (mixed with random CDs when south-facing mountains were too high to get reception), and learned The Salmon Dance, among other classy tunes. Lunch was a chicken ranch sub at a Subway in Salem.

After dropping our junk at my sister's house (both she and her husband are out of the state for awhile), we made a beeline for the Virginia Tech Music Department, where I missed Dave McKee by 10 minutes and chatted with Shelby Cole, who mistakenly thought I was married. I also learned that Jay Crone is now the head of the department, John Husser's office is in the basement, Jimmy B has his own office, and the CAL/C lab is (still) always empty.

Next, I decided to give Rebecca the grand tour of the campus, and started by heading for the old quad to make fun of the Corp. We were met at the top of the stairs by Skippy himself, another music graduate of yore putting his degree to good use by doing computer-y things. I'm guessing that the chances of the two of us randomly meeting there was probably 1 in X where X is the total number of drinks consumed by all the Marching Virginians on every Game Day between 1987 and 2002 when they went "dry".

The next stop on the tour was the University Bookstore, by way of the Torgeson Hall archway and library. We marvelled at the exponential growth in Hokie-related gear, like Hokie Bird Hot Sauce and Childrens' VT Rocking Chairs (only $129) before escaping to the Drillfield. 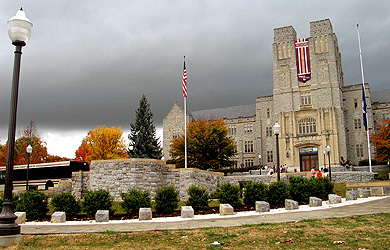 The Memorial for the 4/16 shootings was very well-done and tasteful, 32 stone markers arrayed around a central point on the Drillfield. The town as a whole was plastered with way too many "We Will Prevail" banners for my tastes -- how are you supposed to move on and heal when you're surrounded by signs that try to convince you that you are unaffected by the past?

We walked to the Duck Pond next, where that massive swollen bladder of rain you see behind Burruss Hall finally decided to pee on us. After hiding under a tree for a few minutes, hoping that it would pass, we ended up sprinting to the nearest building, which turned out to be the Entymology building. We (paper) towelled off in the bathrooms and then waited out the rest of the storm by learning all about insects and plant pathology. We also found a picture of Kelley's wife, Kathy, on one of the bulletin boards, and a table containing an array of bugs in cups with photocopied signs all over the building pointing to BUG-IN-A-CUP, as if it were some major festive attraction. 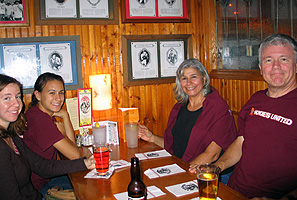 When the rain abated and we had learned all there was to learn about the fascination field of soil erosion, we went to Becca's room in Lee Hall where we bumped into her parents who had travelled down for Parents' Weekend. The five of us went out for the dinner at Macado's where we had sandwiches and a Diablo Quesadilla, and I got a free Killian's from the waitress who was obviously smitten by gallant charm. 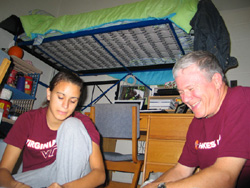 After dinner, we returned to campus, where Becca introduced us to her eight million friends. We then played a game of travel Scrabble on the floor of her dorm room while all the other girls on the hall spent three hours getting ready for sausage parties that they would probably only stay at for ten or fifteen minutes.

Because we would have to get up relatively early in the morning to molest cattle, Rebecca and I returned to Christiansburg somewhat early and ended the evening with an episode of LOST from the second season, since I have succeeded in getting her addicted to the show. 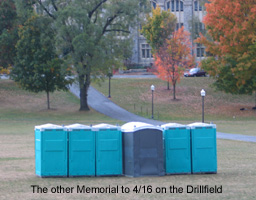 The next morning, we had a quick breakfast at Bollo's (coffee for Rebecca and pumpkin chocolate chip muffins for both of us) and headed out to Kentland Farms, west of Foxridge.

The worst mayor in America

All the uglies live in Philly