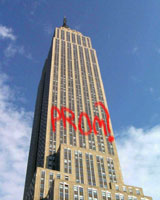 . From the guy who added a slide to the senior slideshow to the guy who wrote PROM? in chocolate chips on some pancakes, kids today supposedly have to make their request like a marriage proposal lest the girl deem their question too unromantic and turn them down. Says one girl, "The romance is gone from everything else. All we do is go to parties and hook up. Prom is like a real date."

In MY day, we did not spend our entire high school careers going to parties and hooking up (or maybe I just went to the wrong high school, or the wrong parties). If you wanted to take someone to prom, you either called them up, or spread word through the neighbourhood gossip. The person replied with either yes or no, and that was that. If you had a steady boyfriend/girlfriend that was obviously the love of your life and destined to be a husband/wife, then going to prom was an implicit part of the package. In fact, that was one major reason people dated at all -- so they wouldn't have to stress over who they'd take to the prom! When you blow a few hundred bucks on a new VCR, they make sure to include batteries to run the remote. Prom is supposed to be the cheap double-A battery of high school relationships.

The bonus of this approach was that getting shut down remained a kind of private embarassment, like groggy mornings when you brush your teeth with hair gel, or the time you fell asleep on the toilet and fell in. If guys have to ask in front of the entire school and then the girl says no, they will most likely implode on the spot, or transfer to a private school.

Just wait for the day that all people who were asked to prom on the deck of the Love Boat and then spent thousands of dollars on one night of entertainment are ready for marriage. Because marriage obviously has to outdo prom, the proposal will have to include at least two of the following elements, or the girl won't take it seriously: space travel, sky writing, erupting volcanos, or herds of wild horses.

The two-hour LOST season finale is tonight! I'm guessing that Desmond will make an appearance for some reason, but I have no idea what they've been building up to these past eight weeks. That's the problem with trying to stretch a 22 show series over 40 weeks -- you lose the story's momentum and forget all of the clues amidst the absurd number of reruns. I also ordered the second season of The 4400 which came out yesterday.

I am going to get your balls.

Baboon didn't flinch after being hit with my secret catapult