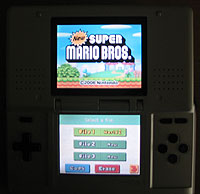 Title: This game easily has the most uninventive, boring title in the history of titles, but I guess none of the Mario games excels in this area. Does it have a plumber playing tennis? Call it MARIO TENNIS! Even so, they could have just called it Super Mario DS or something equally as functional. What are they going to do when the next game comes out? The New New Brothers? It sounds like a dance troupe on Vaudeville.

Music: Catchy, with a mix of new tunes, remixed old tunes, and old tunes exactly as they were in the older games. You can only do so much with nostalgia before it gets tiresome, and they walk the line pretty well.

Graphics: The game is a standard side-scroller so you never have to worry about stupid camera angles, but all the characters in the game have 3D models, so their animations are quite nice. Worlds are colourful and have style.

Cartridge Size: Smaller than a cat's paw. If I ever end up spying for the U.S. Government in some enemy country where I blend in with the natives, like Iran or Libya, I'll bring along my Nintendo DS and then encode the spy pictures on one of these cartridges. Customs will never notice a thing.

Controls: The game only uses two buttons: run/grab/shoot, and jump. There are two predefined mappings you can use to customize your controls. I found that my thumb was too weirdly positioned to feel comfortable in the default scheme -- it must be genetic. Mario jumps and skids exactly as he did in the original games, which may take some getting used to if you haven't taken a course in Mario Inertia recently.

It's Like X meets Y: This game is a combination of Super Mario Brothers 3 and Super Mario World. You progress through levels on an overhead map, often stopping to pick up items at Toad's Hut or unlocking secret paths. It really pulls the best from both of those games, so if you liked those, you'll like this.

Annoyance Factor: Most recent Mario games annoyed me because you had to replay every level multiple times to collect nine thousand doohickeys -- a horrible design decision to give the game some supposed replay value (don't even get me started on Zelda's golden skulltulas). This game retreats to the very basics from the good old days -- 100 coins gets you an extra life, 8 red coins gets you an extra life, or 5 star coins to open up a secret passage. It's not annoying in the least bit.

Difficulty: I breezed through to World 2 pretty quickly. It seems to be about as hard as Super Mario Brothers 3 was (which I thought was harder than Super Mario World), but rewards exploration and risk by giving you millions of extra lives. I already have 30 or so.

Power-Ups and Moves: All the original power-ups are here along with three gimmicky ones: Tiny Mario, Fatty Mario, and Shell Mario. Mario can also do a few later era moves like wall-jumping and that Mario Party favourite: the Ground Pound.

Worth It?: Yes, go buy it. Unless you don't own a Gameboy DS. Then it's only worth it if you enjoy carrying around tiny cartridges and pretending you're a giant.

Below you can watch a short video of how the game looks and sounds. If you have absolutely zero interest in video games, you can also check out our wide selection of movies on other topics, such as cats, and/or cats.