The latest buzz in entertainment non-news news is the observation that seven long-running shows are finally calling it quits this season. I think it's interesting that shows which would once have gotten lavish two hour finale specials with retrospectives and balloons now creep timidly into oblivion, their stars set to appear in 1-800-COLLECT commercials in which Alf gets top billing.

Alias: Of course, I'm sad to see this one go because its first two years were ridiculously good. This was one of the first shows I ever planned my week around seeing (which was probably aided by the fact that it came out when I was a reclusive grad student in Florida for the first time). Sydney Bristow's "bursting into tears" shtick got a little old after awhile and they really overexposed Marshall, but the solid acting of Bradley Cooper, Ron Rifkin, Victor Garber, and Carl Lumbly was Sopranos-caliber and kept me coming back. I haven't seen any episodes in the fifth season except for the first one, and I'm anxiously awaiting them on DVD while remaining spoiler-free. This is hard, because LOST comes on immediately after Alias, so I have to turn on the TV late enough to miss the twist ending but early enough to not miss a LOST twist beginning. That, my friend, is called skill with the remote.

7th Heaven: I never watched a single episode of this show, and I had to look it up online to see that it was on the WB. Was it any good? From promos, it looks like your typical WB family drama without teeth, fun for the whole family, and offensive to none. I could be wrong though.

That 70s Show: This started out as a dumb but funny show, but outlived its humour by about five years. I haven't seen a new episode since I was in college -- apparently some of the cast members aren't even on it anymore? This show also gets the official BU award for Absolute Worst Musical Episode in the history of primetime TV. It's a neat little novelty when you can make a musical version of your show -- but it would really help if one or more of your actors could sing. Even just a couple notes. Even just the same note over and over. I cringe when I think of Red "I was in Robocop working for Dick Jones" Foreman singing "So Happy Together". 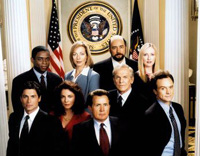 West Wing: Another show I never saw a single episode of. Politics and legal dramas never were my thing, and I'm almost ashamed to say that I'm one of the few Americans that's NOT a Law & Order / CSI junkie. Then again, I never got into ER or police shows either, so there must be something un-American about me.

Charmed: Alyssa Milano is a hot witch with sisters who casts spells with really bad special effects -- what's not to like about this concept? They could just shorten the conceit to "Alyssa Milano is." and it would still be worth watching. I never saw a full episode of this, but I used to flip through it when it aired before Alias on Sundays. You know a show has outstayed its welcome when one season ends with "All three main characters die, but come back to life, played by three different actresses". This is forgivable though, know why? That's right, Alyssa Milano.

Will & Grace: I never really kept up with this show, but saw it a lot in syndication. In Virginia, they air hours and hours of Friends in the evenings. In Tallahassee, it's Will & Grace. The thing I liked about this show was the quick and witty banter -- I'm a big fan of verbal repartée, shows where the dialogue is two times more clever than anything you'd hear on the street.

Malcolm in the Middle: This show had a lot of promise, and I was even willing to overlook the fact that the boys hit puberty immediately after the first season, but it just kept going and going until I lost interest. I hope I'm not around whe we first hear that the actor playing Dewey was picked up for drug trafficking or something. I would get this show on DVD, but licensing issues with the music from each episode prevented them from releasing anything but Season One.

Joey got cancelled too, what a big surprise. Its a shock that it even managed to limp along for two whole seasons.