High school was a blatant waste of time and money, using up hours in the day better spent playing video games, going to the library and reading, or going out back to smoke crack with Zulfan Bakri. However, you could always count on a few peaks to brighten the year and prevent mass suicides. 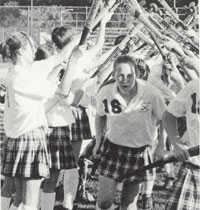 As a sign of solidarity, the field hockey team always wore their skirts on days when they were playing at home. Mix in a gaggle of goggling hormonal teenage boys, and you'll find that those boys will learn absolutely nothing during those school days, and remember very little other than a lot of leg by the time they leave for the day. We always tried to convince the swim team to have a similar practice, but were mostly unsuccessful.

Substitutes
Apparently substitute teachers did not get paid enough to care, so they were always fair game for any tricks the students could pull. The best type of substitute was the career-substitute: recently retired, living on Social Security, and already broken by years of rude and retarded kids, because they'd generally let you do anything you wanted. The more challenging subs were those having mid-life career changes after layoffs who felt the need to assert their authority in the classroom. In 12th grade, we had one of these types for Mrs. Buckbee's English class. He was aptly named Mr. Spindle Fibers, since he had exactly three thick hairs combed over an otherwise bald pate, and somehow we managed to convince him that we were supposed to be having a party to celebrate some assignment (maybe it was passing the AP exams or something) -- to the point where he wrote a permission slip to let one student leave campus to get soda and cake. When our teacher came back the next day, we used the leftover cake to have a "Welcome Back Teacher" party, successfully putting off whatever essay assignment was looming for another two days.

Half Days
Half days were the days when the period scheduler with the digital watch fetish decided that all classes would be exactly 27 minutes long, with a 4 minute window to move between classes. Combine this with a bell system that never worked and you breed a confusing day where every student could pretend to pack up their bags in the middle of class and the teachers would think it was time to quit. In the summer months, a half day also meant I could go over to Jack's house and go swimming.

The Month of May

May is when all the Crew races occur, from Regionals on the Occuquan River to Stotesbury in Philadelphia, to that race in Canada that us colloquial types always called "Canadas". Because Crew is a rich inbred yuppy sport, it would be unthinkable to have races over the weekend, so they generally started on Thursdays and ran through Saturday. This meant that everyone who did Crew generally spent a grand total of 10 days at school in the month of May, spending the rest of the time on buses and eating fast food three meals a day (and then vomiting it all up if they were on the Lightweight boat). I remember volunteering to sleep on the half-chair-half-bed luggage chaise in the motel rooms so the bigger guys could have the beds in a non-homophobic setting, which was just fine by me since I was only about nine inches tall. They'd always feel bad about it though and buy me extra fries for dinner or give me my own bus seat for my sacrifice. It was kind of like the way prison probably is.

I also remember the time our band concert coincided with the Nationals trip. The director refused to budge on the date so the three band-crew kids (myself, Mike Polson, and Kim) literally rolled off the stage and into some parents' van for a madcap midnight trip to New Jersey. Though we were all band geeks, we came from vastly different social castes, and probably did not say much to one another on the way up.

Get a surgeon that plays Super Monkey Ball

Have a Hoffa Cake

This valedictorian will obviously be a boon to society