I have decided that most of the population of the world is completely incapable of understanding the concept of spoilers, and even those that do are sometimes unable to effectively talk about the endings of books or movies in a non-spoilerish way. If you are unhip to the world of entertainment lingo like "jump the shark" and "frost up a smoothie", a "spoiler" is simply any detail about the plot of a movie, book, or show, that isn't common knowledge. It can be the big reveal about the murderer, or just a tiny detail about LOST that suddenly puts everything in a whole new light. Now that the Internet is here it's become even more difficult to read stories about other shows and movies without seeing pop references to spoilers from older shows, as if the writer has to prove that he's seen more TV than you have. And it's not that people are trying to be mean-spirited, like the guy that drove past the bookstore on opening night of Harry Potter 6 and shouted out the ending to hundreds of crying twelve-year-olds -- it's just that people don't think twice about where they discuss it.

Here are a few spoiler incidents I've come across in my day: 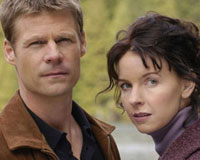 This weekend, I devoured the entire second season of The 4400, that part X-Files part LOST show that airs on USA, the network no one even remembers anymore. Even though the writing is occasionally over the top and reaches WB-levels of melodrama, it's a very smart, well-written show. One of the main reasons I'm so engrossed in the plot is that I have yet to accidentally stumble across any spoilers anywhere. Since it's a show that no one watches, no one ever talks about it in passing, or writes about it in newspapers and so forth -- this makes the twists and turns and all the character development that much more entertaining.

The third season starts on TV on June 11. I'm not sure yet if I'll watch it with commercials -- I'm dying to see what happens next, but not so much so that I want to commit my Sunday nights to sitting in front of the television.

These T-Shirts were brought to you by the letters M and S, and the number 13.

Way too much information about senior citizens