♠ After over four years of living in Loudoun County, I finally signed up for a Loudoun County library card. It wasn't because I'm running low on books to read -- it was just because I wanted to check out back issues of Consumer Checkbook for Heating and Air Conditioning company reviews and I was too stingy to get a subscription.

♠ My library card is labelled in a low-tech way with a felt-tip pen, but at least the librarian had good handwriting. On the high-tech side, the card also came with two keyring-sized copies that seem to be all the rage these days.

♠ I have never had a keyring card of any kind, even for groceries or movie rentals. My keyring is quite bare, featuring only my house key and car key. However, this spartan composition will make it an excellent self-defense weapon on the day that Carlos Adolfo Dominguez with a bag on his head tries to attack me while I'm waiting for the bus to go to the movies 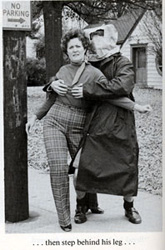 ♠ The other day, I met Rebecca at the Reston Town Center for a post-work dinner. After poring over a listing of movie times at nearby theatres, we realized that there's a distinct movie gap between 7:45 and 9:30 on weekday nights. Wouldn't it make more sense to start showing movies right around 8 so people can eat dinner and watch? Instead movies either start during dinner or so late that you might as well stay up all night afterwards watching one of your unnecessary cable stations.

♠ Speaking of unnecessary stations, XM Radio is promoting XM51: All Coldplay All the Time. Didn't they learn their lesson from the disasterous Led Zeppelin channel that barely lasted two months?

♠ This weekend, I'll be going for a bike ride, and also starting the Java rewrite of the URI! Zone, something that only took me twelve years to get around to. 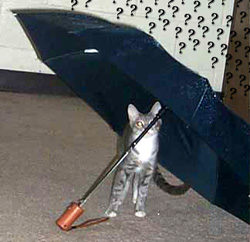 ♠ Speaking of things taking twelve years, a recent hot topic in the news was the DNA-based clearing of the parents of JonBenet Ramsey in the 1996 murder case. Outside of the usual complaints about the media, I always hated the coverage of this case, because it introduced us to the phrase, "under an umbrella of suspicion", and then beat us over the head with it for the next twelve years. That phrase doesn't even make sense -- wouldn't an umbrella of suspicion keep you from getting blamed? Is there a hole in it that's letting the suspicion in? Why am I asking so many rhetorical questions this week? I'm under my umbrella of questioning!

♠ Every time I read the phrase "hot topic" in the newspaper, I picture Jim Gaffigan saying it

♠ Don't forget that tomorrow is 12 of 12! Have a great weekend everyone!

Goodbye from the world's biggest polluter