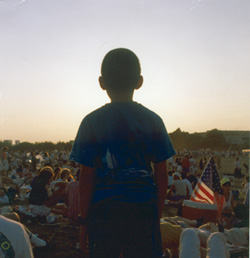 Tomorrow marks the 232nd (we were THIS close!) anniversary of the first time one of our Founding Fathers wore diapers and waltzed around a bonfire. To carry this tradition forward, American society instills this patriotic action in its youngsters at early ages by showing them DVDs such as this one

The national government also comes to a near standstill as thousands of workers go on vacation while allowing the hemorrhage of bureaucratic money (also known as Fridays). Working for a government contractor means that you get this perk by association -- since everyone on the government side is off on a ten day vacation, there's no meetings to attend or customers to appease.

In the spirit of the Founding Fathers (who did not blog), there will be no updates tomorrow. I plan to spend a good two-thirds of the extended weekend eating things wrapped in bacon, such as bacon, and doing shots of vodka out of bacon-cups (which you then crumple up like a Dixie cup and use to chase the shot).

What are your plans for the weekend, other than entering Mike's Lyrics Contest?

Hold the tobacco, pass the pot