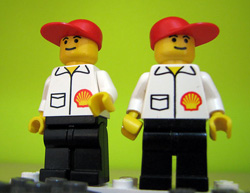 Scientists say they have found a workable way of reducing CO2 levels in the atmosphere by adding lime to seawater. And they think it has the potential to dramatically reverse CO2 accumulation in the atmosphere... Shell is so impressed with the new approach that it is funding an investigation into its economic feasibility.

There's nothing like the backing of a gigantic oil company that posted a $9 billion net income in the first quarter of 2008 to convince the world that your environmental idea is a good one. Not only does Shell think it's a great idea, they're actually chipping in a few bucks to fund a study to see whether it's worth the money to keep funding the study. Then again, when I owned the Shell Lego Gas Station as a child, gas was regularly under a dollar per gallon -- perhaps they really care about the Earth after all.

Adding lime to seawater increases alkalinity, boosting seawater's ability to absorb CO2 from air and reducing the tendency to release it back again.

The chemical symbol, CaO, of lime has been known for many years. However, earlier scientists tended to misinterpret the chemical equation for dissolving lime in water, leading to many unsuccessful experiments.

Tim Kruger [...] is the brains behind the plan to resurrect the lime process. He argues that it could be made workable by locating it in regions that have a combination of low-cost 'stranded' energy considered too remote to be economically viable to exploit - like flared natural gas or solar energy in deserts - and that are rich in limestone...

The process of making lime generates CO2, but adding the lime to seawater absorbs almost twice as much CO2. The overall process is therefore 'carbon negative'.

When asked what would be done with all the surplus absorbed C02, Mr. Kruger directed reporters to his new drink recipe, for a delightful concoction called an "Irish Carbonne".

This project is being developed in an open source manner. To find out more, please go to [its] new website, launched today.

For the uninitiated, open source development means that everyone from around the world will contribute fabulous ideas until they get bored or their free AOL accounts expire, leaving only two scientists left behind. These two will grow increasingly antagonistic as their approaches diverge, with one scientist spitefully deleting the other scientist's lime supply and locking the ocean until the slighted scientist gets fed up and leaves. At this point, OPERATION LIME will fork, with the Indian Ocean hosting the "obviously correct" solution for lime dispersal while the other oceans adhere to the "historically accepted" approach.

Finally, an uninvolved third party will create jLime two years later, which has nothing to do with the original designs, runs in Java, and becomes the defacto standard in lime dumping.

Police rescue, kill man. Alcohol may have been involved.