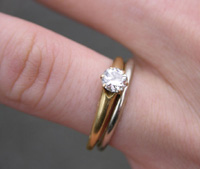 I spent yesterday afternoon writing up a Statement of Work for a proposal at work, which didn't leave me much time to write anything witty or tearjerking for today's update (especially since I spent most of the evening working on various Java improvements for the next edition of the URI! Zone). The best I could come up with was to title today's post ominously and trick a bunch of people, because it's not about that kind of proposal.

That reminds me of the cleverest episode of Will and Grace I ever watched in Tallahassee (at 6 PM on channel 4 while the Banquet fried chicken was cooking in the toaster oven and Booty was going crazy, running up walls). Grace was trying to trick Harry Connick Jr. into proposing by asking him about a four person seating chart and mixing in the words, Will, you, Mary, and me.

Harry Connick Jr. was also creepy in the serial killer movie, Copycat, which came out sometime in the 90s and was one of the few movies my sister and I ever went to the theater together for (she was on winter break and we went to the movie theater at Bailey's Crossroad where the giant Target sits now). That was also probably one of five total times we socialized together after junior high school.

I could keep on stream-of-consciousnessing and reminiscing for several more paragraphs, but then I would steal Friday's thunder, and you wouldn't know where the lightning was without the ominous rumble and would probably die. So for public safety, I'm turning the podium over to you. There are 21 people pictured below who have posted a comment within the past two years. If you are one of them, your job is to either post an interesting story in the Comments section, or ask one of the OTHER 21 people a question that they then must answer.

The winner of today's little game will be the person who was adopted from farthest away during the Carter presidency, and will win a $10 gift certificate to Amazon.com.

Searching for the largest fishies