In the past seventy-two hours, I've accomplished more on my website TODO list than all the progress the US has made in Iraq, Afghanistan, and Vancouver1 in the past three years combined. All it took was consolidating my fanciful feature fragments into a concrete list with things to check off.

Though I would like to claim credit for being super efficient, I am no longer the accomplishment machine I was four years ago

, because old age slows you down and makes you prefer rewatching the fourth season of Alias (to see if Mia Maestro is still as hot as she was when it aired2) to actually doing anything worthwhile. I have plenty of projects that I started with gusto and then abandoned like vegetables during a salmonella scare3. 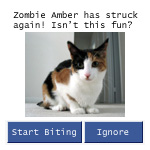 1: The Canadian invasion has been in the making for years!
2: Yup.
3: The upside of the salmonella scare is that I can appear health-conscious rather than ornery about avoiding the eating of leaves and shrubs.

In search of the magical penis thieves