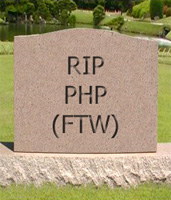 ♠ It's been a busy couple weeks for web improvements and I'm 100% pleased with Kattare as a hosting company. If you need a hosting company than can handle more complex sites with a support line that's actually useful, and don't mind given away a decent chunk of your disposable income, I would definitely recommend them (and not just for the 15% kickback I would get for referrals). Since I moved over, I've been busy writing a Java forum and gear database for my Warcraft guild

, and excreted the last pooplogs of the PHP language from the bowels of this site, replaced with healthy whole-grain Java.

♠ For the less technical readers, the difference between a PHP-driven site and a JSP-driven site is like the difference between a homemade third-grade diorama in a Payless shoebox for a book report on The Mouse and the Motorcycle, and the diorama that was obviously made by the rich kid's mom, who went to Michael's to get top quality posterboard. Sure, the first one has a little charm in its Scotch-taped motorcycle and the mouse with no head (because it fell off on the bus ride), but the high-quality one is going to win the school contest and the Book It! pizza coupons.

♠ I hated dioramas in elementary school, because although I was artsy (and crafty), I never had the patience to perfect my artistic vision, and the contents of the shoebox never looked anything like what I had in my head. This is also why I my sixth grade "Map Our School" assignment got an A+ for detail and a D for neatness. Had I based a career on this, I would have forgone architectural blueprints in favour of topographical maps of mountains in earthquake-prone regions. 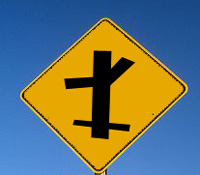 ♠ Another fun graphical career would be to make the warning signs where roads converge in a nonconformist way (similar to Communist party meetings in the 1950s). Sometimes it's hard to tell the difference between an intersection warning and a mutated stick figure that was murdered.

♠ This weekends' plans mostly revolve around relaxing. If I'm so inclined, I'll implement the next big URI! Zone feature: putting five years of comments into a database, so you can read all of Rachel's posts at once, or find out when the last time someone talked about Beavis was. I may also study for a Java certification, which is back on track now that I've gotten rid of that horribly useless Certification for the Learning Disabled textbook.

♠ My weekend plans will DEFINITELY not include anything related to my wisdom teeth, since the oral surgeon took all of two minutes to tell me that I'd run the risk of nerve damage if he tried to remove them, and that my original dentist was a freaking retard for referring me in the first place. Dentistry HMOs are the best.

Newspaper misspells its own name