♠ I managed to catch a case of what was either elephantiasis or a flu-like cold on Wednesday which is the reason there was no update that day. I spent almost all day Thursday sleeping it off, but did make sure that I was awake for LOST in the evening.

♠ The twist at the end of last season's LOST could have very easily destroyed the show if handled improperly, but after watching the season premiere, I'd say that they've not only managed to meet expectations, they've also revitalized the show in a big way. I give it two Booty's up.

♠ My tenth grade English teacher, Mrs. Riviere, had three grammatical rules she was fanatical about: Use because of instead of due to all the time, not only must always be followed by but also, and alot is not a word. I always have trouble with the second rule (see also, previous fragment), because but also fits into sentences about as well as a Goth in the Key Club.

♠ One time in English class, we moved our desks into a circle and had to recite "Alot is not a word" in turn. This inanity lasted for half a revolution around the circle before Laura Moody screamed, "Alot is not a word, goddammit!" She was one of the weird drama people who gave me a Purple Platypus

which was last seen on top of Ella's head 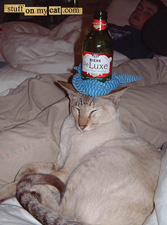 ♠ I don't see how any money is ever made on web advertising. The only time I ever click Google Ads is when owners of a site ritualistically remind me, "we're not supposed to tell you this but please click on the banners today" to drive up their clicks. 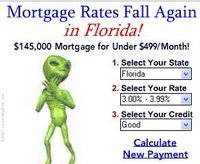 ♠ The worst kind of web advertisements today are the animated ones that float over the page and interfere with your reading. A close second are the mortgage ads with the dancing man/woman/alien. It's almost like there's a contest to come up with the most obnoxious ad ever.

♠ If I were to come up with such an ad, it would involve the Question Mark Suit guy, the loud guy from the Oxy-Clean infomercial, and the truth anti-smoking campaign. These images would fill up your entire screen then automatically close your browser and deliver free samples of the product to your mailbox.

♠ This weekend will include such activities as getting well again, eating ziti, gaining chips, and playing Warsong Gulch. Since it's the heart of winter, all activities are supposed to be indoors and of a hibernating variety. What are you doing this weekend?

♠ Happy Birthday to Stretch! Have a great weekend everyone!