contains 100% of your recommended daily allowance for saturated fat 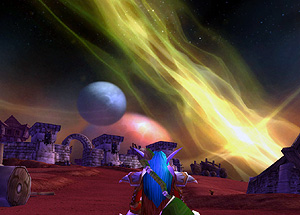 ♠ I hit level 61 in World of Warcraft last night and made my first trip into the Outlands, the expansion pack world that I'd never been in before. Graphically, the new world is as impressive as anything Blizzard has done in the past. I'd like to see a full-length feature film by the Blizzard team -- they could probably give the Pixar guys a run for their money. I'm glad that I got a faster graphics card when I bought this new computer though, otherwise I'd be stuttering through the world like an Arban double-tonguing etude played by a twelve-year-old. With the Geforce 8600 GTS, everything is smooth and speedy.

♠ FIOS is finally bringing smooth and speedy Internet to Sterling. After an attack of paper door-hangers advertising the service ($100 a month for phone/cable/internet), my backyard was spray painted with bright pastel lines. Since it's probably not a runway for Mayan aliens, my guess is that the Verizon workers will start laying fiber optic cable very soon.

♠ Of course, yesterday's snow storm obliterated the lines, but I saw crews out working in other parts of the neighbourhood anyhow. I wonder if cable diggers get extra pay for the five inches of snow -- it means they had to dig five inches deeper than expected!

♠ I came home around lunchtime yesterday to beat the snow, and even then it took thirty minutes to get back. Northern Virginians have a very low tolerance for snow -- every office building in Reston was emptying out as parents rushed off to get their kids from school and people without kids pretended to have kids requiring a pick up. 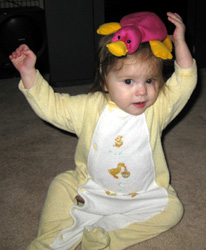 ♠ I don't have a kid, but I did give Ella a hat to protect her from the snow. It barely stayed on for long enough to take a picture, but had the side effect of teaching me how to use the "Continuous Shutter" feature of my camera. Up until then, a continuous shutter to me was just a doorman with OCD.

♠ I've never understood the point of a doorman, especially at hotels with revolving doors. It seems like a position they made up just so you would have one more person to tip, like that annoying guy in the bathrooms of wannabe-upscale restaurants and clubs who tries to give you a towel.

♠ When you have the bladder of a four-month-old puppy, you tend to get lots of face time with the towel guy. He always seems incapable of NOT handing you a towel, even after the politely preemptive "Sorry, I don't have any change". After his third attempt, it should be socially acceptable to pee on his towel.

♠ This weekend I'm going to Costco to stock up on my greatly depleted stock of rations, since I haven't gone since the New Year. I'm also going to a housewarming party on Saturday night and working some more on Europe planning. On Monday, I'm going to Martin Luther King Jr's birthday party (at Parkwood Apartments on MLK Boulevard in Tallahassee) and then going to work like any other day. The only thing on my calendar for Tuesday is a Full Moon, so I guess I have to learn how to turn into a werewolf.