♠ This is actually only the 116th episode of Friday Fragments, but that wouldn't be quite as impressive for an opening fragment. However, you could argue that there are 106 more episodes until the 222nd, and if you treat 106 as the numbers 10 and 6, then the next SAT number in that sequence would be 2, and it would be the THIRD number in the sequence, hence 3 2's = 222. Done and done.

♠ Speaking of irrelevant numbers, 13 is the highest unofficial score I've heard about from Wednesday's NAME-THAT-TUNE contest. Now's your chance to do better than that! Entries are due by next Wednesday and answers will be posted next Thursday. Some readers are already begging for hints, but that would be weak sauce. 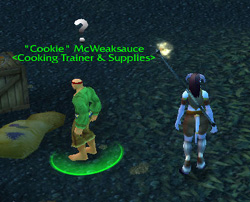 ♠ Speaking of weak sauce, here's proof that Doobie was a lead designer on Warcraft. I almost expected Cookie to have a pet named Hemi.

♠ Obligatory Warcraft fragment: Plinky has over 45,000 lifetime kills and 52 days of play-time (which is the equivalent of going to public school for one complete grade and playing Warcraft the entire time!). Plinkette is 3 bubbles from level 70, but has been sidetracked with gathering potion materials because Plinky is an addict in need of a fix. While Plinkette clowns around gathering swiftthistle, Planky is rapidly rising in level.

♠ This is actually the third character to be named Planky. The other two were both paladins which I deleted because they were boring. Playing a Paladin was like putting on a LOST DVD and watching the ridiculous five-second DVD menu transitions eight thousand times in a row, while Michael Giacchino's "Yo-Yo Ma(ma) on Crack" sound effect plays in the background.

♠ Speaking of LOST and being bored, despite the good twist on the end, I was bored for most of the episode, but mostly because I find Kate boring. Apparently I get bored very easily. (Note the double transition in this fragment. I should write fugues).

♠ In school, the way I showed my aversion to boring things such as classes and music major recitals was to fall asleep at them. This is an incomplete solution for the real world, because apparently you're not allowed to fall asleep during meetings.

♠ Speaking of work, an employee left the company last month, and in his goodbye email he wrote, "I'm sorry I didn't get a chance to interface with all of you while I was here". Fortunately, I have not yet devolved into such officespeak.

♠ This weekend includes two poker games and a dinner for my dad's birthday. Have a great weekend!

This is apparently the first time someone tried to drive into it.