Plan for Telescopes on Moon's Far Side Is Revived

With NASA planning to send astronauts back to the moon sometime after 2019, those dreams of a radio telescope looking out through the galaxies from the protected side of the moon have been revived. The agency recently awarded two planning grants for research on the necessary technologies and on how to put them in place. 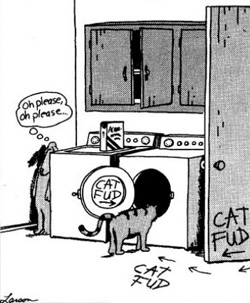 Long time readers of the URI! Zone will recall that I'm not a big fan of my taxes going to fund NASA

, because I'm all about cost-effective ventures. I personally believe that it would be more cost-effective to purchase twelve tons of pure Columbian cocaine and dump it all on the Donglingshan Mountains as fake snow to make people believe that Beijing is an environmental paradise without a hint of pollution for the Summer Olympics, than it would be to fund space exploration. Unless there are an alien collection of talking cows and other strangely anthropomorphic barnyard animals living on the far side of the moon, it's not worth our time (especially since the official illustration looks like we're going to impregnate the Moon and make a bunch of little baby moons. Ew. Did I say ew? I meant Io).

The early prototypes would not be able to gaze far into the past but could be useful for studying space weather, especially the enormous and powerful solar eruptions called coronal mass ejections.

In 1993, the US Government also gave $3 million to a research team to discover if rabbits that smoked pot were more susceptible to syphillis. We might as well throw away the telescope grant in a similar fashion -- perhaps a study of Coronal mass erections (which is, of course, impotence caused by too much alcohol in college-age fraternity brothers).

"One of the issues at the meeting was that if NASA is going back to the moon, what would we like to do there?" Smith said. "The astrophysicist group made their proposal to look at the very early universe, and that got a lot of support."

, but more damaging is the idea that we're looking for bigger things to do when we can barely keep a space shuttle afloat as it is

. We can't even land a probe on the BRIGHT side of Mars without busting it -- how much better luck would we have parallel parking in a place that's permadark and then offloading a cargo of highly fragile and expensive telescopes? 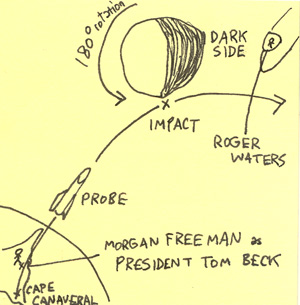 One possible solution would be to fire a probe at a glancing angle to the moon, effectively moving the dark side 180 degrees for long enough to erect some telescopes in the daylight. NASA is pretty good at attacking celestial bodies with probes

so the success rate of this operation has immediately gone up by a factor of 1.04.

The bottom line here is that I want my tax money to go towards a useful program, like building bridges in Alaska or corrupting the Diebold machines so McCain loses the election. The only acceptable source of revenue for a project like this would be the tolls from Virginia's forthcoming HOT Lanes

which will tax stupid people who don't realize that every single road in the area eventually ends in a teensy tiny congestion-causing bridge that even Tylenol Cold and Flu couldn't cure.

I would even send my tax dollars to the Walter Reed Army Medical Center, which recently brought in P.R. experts from the Disney corporation to teach doctors and nurses how to improve customer service

A video montage of Disney-related images, ranging from Mary Poppins to Pirates of the Caribbean to Hannah Montana, followed. It was meant to demonstrate the sheer expanse of the Disney empire.

Not everyone in the crowd looked impressed.

Disney representatives later caveated their inspirational speeches by confirming that if a mermaid suddenly turned into a human, there wouldn't really be clothing that magically appeared over her naughty bits, and that "Fantasia was a crappy mistake that should not be treated as part of the standard Disney mythos and canon".

Who needs security when you have a robot?