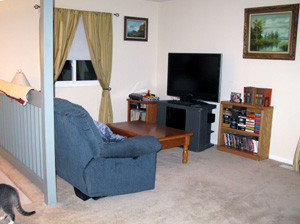 Yesterday afternoon, in between spurts of productivity and Mind Blasts, I decided that it would be a good idea to move the exercise bike back out of the basement and into the living room. The blustery weather outside combined with the fact that I have the heat turned off in the basement made me realize that I'm tacitly accepting that fact it will never be used where it currently sits. In the living room, next to the TV and the giant stacks of DVDs, I may still never use it, but at least I'll have to look at it every day.

Before I could bring the bike up though, I had to rearrange the living room -- there just wasn't a good place to put it without making it the centerpiece (and everyone knows that Amber is the centerpiece of any room). I love rearranging rooms, having lived in tiny spaces for most of my life -- it's a more tactile version of the Gridlock game

where you have to drag other blocks around to get another one out of the box.

Growing up, my room was roughly three feet by two feet and you could barely spit across it without smashing your lip against the walls. I would rearrange the room every six months or so, always trying to maximize the usefulness and the walking spaces while fulfilling such criteria as "the door must open all the way" and "Mom won't vacuum if the vacuum cleaner can't turn around the edges of furniture". I lived in Tallahassee for two years, and rearranged each room of the two bedroom apartment twice, three times for my bedroom in Foxridge, and two times for my bedroom at the Elms. 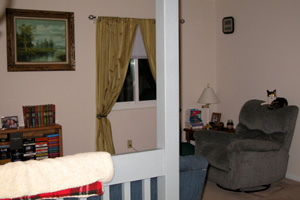 The final floor plan I came up with today is very similar to the way it used to be when I first moved in (see also, Kathy's submission to my "Arrange My Living Room" contest in 2004

). The TV area is much cozier, you can now play the Wii from all parts of the room without losing connection, and you can watch TV while cooking, but at the expense of being much closer to the screen when sitting on the couch.

I got so caught up in rearranging the living room that I forgot to bring the exercise bike upstairs. I got plenty of exercise, regardless, having burned at least four and a half calories.

The secret sex life of wombats

GameFAQs is a hotbed for terrorism