A couple weeks ago, I was at Costco doing my normal Saturday morning shopping for the sundry essentials, like Guinness, corned beef, and forty-pound crates of kitty litter. (The fact that two separate Pointless Vignettes have now taken place at Costco is an unintentional coincidence, but serves to highlight the fact that Costco is an interesting place where all sorts of magical events occur).

When leaving, I drove around the back of the store -- trying to cross the main thoroughfare takes forever since you have to wait for all the frail, retired Floridans sisyphusing their five hundred pound pallets of fake bottled spring water across the street, hoping to gain enough momentum to clear the curb on the opposite side.

This covert route took me past the Costco Loading Dock, where a giant sign had been newly erected across from the dock. At first, I figured it was one of those highway safety warnings like "Did you remember to turn your lights on?", "Look both ways for consumer traffic before making your wide right turn", or "Caution: Bridge May Be Spicy!". As I got closer, though, I could clearly read the two foot high red letters against a hygenic white background.

TRUCK DRIVERS! HAVE ALL THE FORKLIFT OPERATORS EXITED YOUR TRAILER? 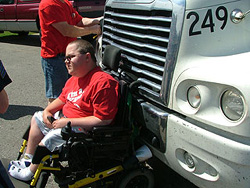 , it's pretty funny to imagine a forklift driver tooling into the back of a truck, only to have it pull away from the loading dock and head out on the highway (I believe something similar happened to Marion in Raiders of the Lost Ark). It's even funnier to realize that this apparently happened so many times that Costco felt the need for a very large, very visible sign.

Should you ever get a job as an inventory man at Costco and find yourself in a similar situation, here are a few tips to keep you safe and alive.

Abercrombie gets hit with obscenity charge

Please think of the Busch