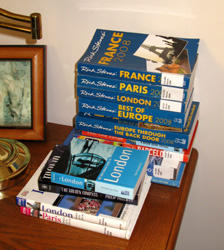 In the previous post, we had just purchased the Eurail pass for unlimited train travel in France and Spain. The next step: make lists of fun things to see in each city and then pare them down to fit comfortably in the two and a half week period. For this task, we relied on guidebooks from the local library and the wise advice from world-traveler Paige, who has written plenty of London/Barcelona posts on her blog

We had good success with the Rick Steves guide books, because although he had different interests than us (and a strange fascination with ice cream shops), he laid out the information very concisely and exhaustively cross-referenced. As long as you can stomach the constant advertisements for the Rick Steves empire (buy this sleeping bag on ricksteves.com! Don't forget to read Rick Steves' Guide to Airline Lavatories in Latvia!) it's a good high-level resource.

Paige also recommends his maps, saying that they're accurate and detailed. I haven't experienced this myself, but I've written a letter to Mr. Steves, asking him to map out my neighbourhood. If he correctly identifies the high points like the ABC store and Big Lots, I'll have confidence in his mapmaking abilities.

Everyone says that London is pretty expensive, so we started with a list of free or cheap sites like the British Museum, Cartoon Museum, and various churches. We also want to have some pints of Guinness, stroll through markets, and see some live music, using the money we save from tourist attractions. Personally, if I'm going to blow twenty pounds on a vacation, I'd rather it be on a delicious meal than looking at a painting that's only famous because it's old. We opted not to get the London Pass because so many attractions are already free, but will be getting all-you-can-eat Tube pass for unlimited subway travel while we're there.

In Paris, we started from the list on the Paris Museum Pass, but ultimately determined that it wouldn't be cost effective (especially since it's only sold in increments of even numbers of days). Among the sites we plan to see: the churches and chapels on the Ile de la Cité, St. Germain du Prix, the Rodin museum, the Sewers tour, the Catacombs, the Eiffel Tower of course, and a stroll down the Champs-Elysée. Communication will be my responsibility here, so we'll be ordering lots of Orangina (une orangina) and Coke (un coca).

It was much harder to chose places outside of Paris to visit that were still sort of on the way to Barcelona. We liked the sound of Colmar and Mont St. Michel, but both were too far off the trail. Nice and the surrounding areas sounded too modern and touristy. After much deliberation, we settled on three hotspots: the palace at Versailles, the castle at Carcassonne, and the quiet(er) beach town of Collioure.

Based upon this wishlist of sites, we plotted out three full days in London and three in Paris, with the remaining eight days to be divvied up between places in France and Barcelona. With a date in mind, we purchased tickets for the high speed train between London and Paris, getting a major discount because we had Eurail tickets (we had expected $200 per person according to initial information online, but it turned out to be $200 total for both of us).

Going out of your way to contest a traffic ticket

Diplomatic stink over finger in butt