more fun than a bottle of inert gas

. "A generation of neglected, unsocialized feral fatties awaits us." Only if they roll a druid.

♠ Obligatory Warcraft fragment: Plinkette is level 68 and just entered the Blade's Edge Mountains. Pinkly continues to sit in Ironforge making swiftness potions all day long. Plinky now has a Gnomish Poultryizer and has gone 29 - 1 in Warsong Gulch since creating it on Wednesday. I'm assessing whether to create a second one just for kicks. 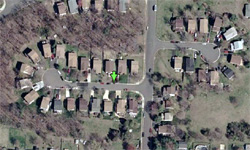 ♠ Loudoun County real estate assessments went out this week and my house has depreciated by 25%, which should be nice when tax time rolls around. I'm not too worried about the drop -- it's still higher than it was when I bought it, and it's generally at least $20,000 higher than the surrounding houses, no doubt because it has cool extras like sidewalks and cats. The neighbours can't compete with Booty!

♠ I still don't communicate much with the neighbours. The three houses on my east sieede are filled with people that don't speak English, and the three on the west have owners who DO speak English but are anti-social like I am and stay indoors all the time. Granted, the guy who shares my driveway tried to tell me about how someone sideswiped his car (completely in Spanish) last week, and the Mormons knocked on my door at 8 PM in an attempt to interrupt my poker game for the good of my soul, so it's still a friendly place to live.

♠ I haven't won poker yet this year. Jaood (who chooses the more intimidating nickname, Mike, at the poker table) has won two in a row, and Ben won last week. Meanwhile, Mike (of Mike and Chompy) will be moving up here at the end of the month, and announced his grandiose plans to become the new poker champion of the world.

♠ After that, there will be two Mikes at the poker table. This is unacceptable. Mike (of Mike and Chompy) has suggested that Mike be retagged as Evil-Mike, and others have noted that since Mike is the home team, Mike (of Mike and Chompy) should be retagged as Florida-Mike. In all likelihood, I'll just refer to one of them as Alfred and one of them as Chauncy, completely eliminating any confusion.

♠ Now that I think about it, I'll probably choose a different name than Chauncy. I don't know any Chauncy's, but if I did, I bet they'd be the type of person I'd want to punch in the nose. I also bet he'd have a strange resemblance with the actor, Joey Slotnick.

♠ There are no big plans for the weekend other than to catch up on errands and do some paperwork. Have a great weekend!