because even some crappy half-assed sentences are more exciting than work on a Friday. 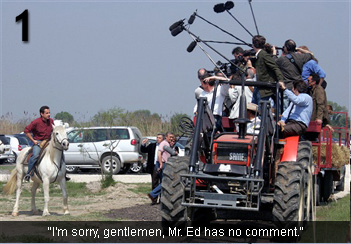 ♠ Congratulations to my Mom, who has now won three of the four Caption Contests on this site. She wins a $10 gift certificate for her efforts, easily outscoring all the other permutations of Mr. Ed and Tony Shaloub. Entries were also submitted by Mike (of Mike and Chompy), Jaood, Rebecca, and myself.

♠ With Mom winning all the Caption Contests and Kathy winning all the Name-That-Tune Contests, I may have to invent some new contest types that skew differently. Some possible ideas: Spot the PHP Syntax Error, Name all the Pokemon, Organize the Pregnancy Symptoms by Week, or Name that Tuba Soloist.

♠ Alternately I can start a Fantasy Draft for baby wrestling, and pit everyone's progeny against each other like I said I would long ago. I think Philip's baby, Madison, would win, because she's probably wiry and scrappy like her daddy. P.S. Philip, Anna says that you need to bombard everyone with more Madison pictures. 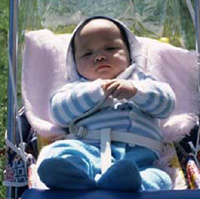 ♠ Putting my money where my mouth is, here is a baby picture of BU. Any resemblence to Kuato from Total Recall is mere coincidence.

♠ Total Recall is one of those movies I used to watch all the time, but I haven't seen it in years. We DID watch Amélie again last night -- it's a very fun movie and I could actually understand about 40% of the French without the subtitles, probably from my recent bouts of listening the the French Pop station on XM (102: Sur la route).

♠ We also went to the Beach Shack for dinner last night (though we didn't take the outdoor seating). The Beach Shack is a little restaurant in Falls Church with seafood, a (sand)bar, and a beach motif. I have the buffalo-style shrimp because I was intrigued as to whether it would be any good. It WAS good, but my final opinion is that the buffalo sauce was wasted on the shrimp, since shrimp is already so flavourful. From now on, I'll leave the buffalo to the chicken and have plain shrimp for the lickin'.

♠ I'm not liking lichen lickin' though -- I'll leave that for the caribou.

♠ I've never had coffee at Caribou Coffee, but if they merged with a Japanese restaurant chain, they could become Caribuki and serve sushi with the lattes.

♠ Today is Amanda's birthday and also Rebecca's last day at her job! Have a great weekend everyone!

Law and Order: The Home Game