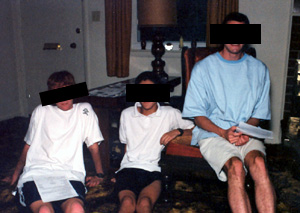 The most recent local news to spread like falling dominoes in a burning building is an article in the Washington Post about a Fairfax County Spanish teacher / track coach who was arrested for using his computer to send dirty pictures to a minor (who turned out to be an undercover cop). If you're curious, you can easily find the article yourself, but I will not be mentioning names on this site.

Why not? Because this is a guy I graduated from high school with. For people keeping score at home, this means that my shortlist of infamy now includes a suspected pedophile and a girl who was murdered by her ex -- as of right now, I do not know any buggerers or crystal meth addicts, but that is subject to change at any time.

"Mr. Spanish" added me on Facebook just a few days after the New Year. Before that, I hadn't seen or heard from him since graduation (a typical state of affairs exacerbated by the fact that I'm better at keeping in touch with my toes than old friends, and I can only do that while sitting Indian-style). In high school, he was just a typical friend -- nothing out of the ordinary or strange. Straight out of one of the many upper middle class families on the east side, he sat behind me in two English classes, did band and track, and even came to one of my End of The Year Parties senior year.

When I first heard the news over the phone through the high school grapevine, I figured it would be another one of those cookie cutter cases you see every day in the news -- student accuses teacher, investigation ensues, no verdict is reached, and no one ever knows for sure who was right and who was wrong. In this case though, the details painted a high-definition picture: Mr. Spanish had chatted with the undercover cop over a ten month period thinking it was a 13-year-old girl, and sent at least one picture with the wiggly parts wiggling. The cops were steadily building evidence, and only moved when they realized that he was a teacher and in contact with children every day. No matter how good a lawyer you have, those circumstances are hard to repaint in a better light.

Whether he's guilty or not, the police were absolutely right in preemptively stopping him and breaking the contact between him and his students/athletes. Maybe Mr. Spanish was harmless. Maybe he viewed the Internet as a safe outlet for his perversions. Maybe he had never seen To Catch a Predator on prime time, and would never have done anything beyond encoding his weenie in a JPEG file. Whatever the case, the safety of the children should be the number one concern. It's the same idea as a cop involved in a fatal shooting -- get them off the streets until it's clear that the shooting was justified, and then allow them to come back if they're in the clear.

No more has been announced in the news since the arrest, so I guess I'll wait and see what happens next. Hopefully Mr. Spanish gets the help he needs, no children were harmed in his care, and I befriend a meth-head to enrich my ready store of stories to tell.