In the previous installment of Europe Day

, we had purchased plane tickets to bookend our two week trip like, well, bookends.

The next step was to work out all the interstitial transportation arrangements. We wanted to devise a plan to get us from England to Spain at a reasonably leisurely pace, with a fair amount of flexibility to veer off the planned itinerary. We also figured that handling the bulk of the transportation up front would help us to more accurately budget things like pints of beer and prostitutes from the Quarter Pigalle, Paris' red light district.

First, we considered our options for getting out of the UK and into France. We compared the high speed train, the TGV, which takes a couple hours, goes from the heart of London to Paris, and costs $196 per ticket to several other mixes of planes, ferries, and buses. Ultimately, we settled on it because, despite the expense, it was the most efficient, hassle-free way to move. I believe there was also an option involving two buses and a ferry that costs about $100, but it would have taken eight hours, not to mention wait times and sitting around. We didn't buy TGV tickets yet -- we weren't sure how long we'd stay in London, and we knew that there might be a discount involved if we also bought Eurail passes. 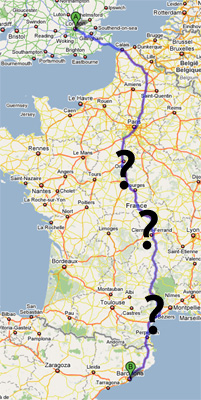 For travel on the continent, we immediately ruled out car rentals because we're trying to take a vacation from commuting. Trains seemed both inexpensive and exotic, so we read up on all the various permutations of Eurail passes and considered the gems of wisdom you all provided in my Comments section. As a baseline, we examined the two-country Eurail Saverpass, which provides unlimited train travel for two or more people (this also means we're not allowed to get sick of each other until we reach Barcelona). We invented a variety of whimsical travel plans crisscrossing France and Spain and then looked up the price it would cost to just buy individual train tickets. It turned out that individual tickets were about $10 less expensive than passes, and we decided that the convenience of the pass was worth $10.

Once we'd picked the passes, we had to decide how many days we wanted on the pass. Saverpasses are designed so you can get unlimited travel on X days in a two month period. We knew we wouldn't hit the two month limit, but still had to get enough days so that we wouldn't end up stranded on the Andorran border with no days left. After inventing increasingly crazy travel plans as tests, we decided we'd probably need four days of travel time in the two week period. This number seems small, but realize that we won't even use the pass until we've decided to leave Paris, which is at least 1/3 of the way through the trip. Just in case though, we bought the 5-day passes. That way, we have the flexibility to leave a city if it sucks.

Delivery of the train passes was fast -- we ordered on Friday and got them on Monday. DHL is still a crappy delivery service though -- last year they delivered my computer to my non-English speaking neighbours while I was at home. Next time, the deliveryman honked from inside his van until I came out because it was raining and he "didn't want to get wet again". This time, the passes, which were clearly marked "Signature Required" were left inside my door, and the online bill said "SIGNED BY FRONT DOOR". I guess my front door is smarter than I give credit for.

The next step after train passes is the fun part: creating lists of what we want to do and see in each of our major destinations. This will determine when our TGV tickets should be and how much money we'll throw away in the more expensive cities like London.

Any more tips? Leave them in the Comments section!

I have, everyone has and they love it.