Travelers, shoppers and office workers -- interviewed at the airport, in parking lots and in Tysons area strip malls -- said they were stunned by the Federal Transit Administration's announcement Thursday that the $5 billion rail line would not qualify for federal dollars without drastic changes in price and management. Dulles rail was counting on $900 million from the FTA, and state officials have said all along that without that money, the project would die.

Even a public-schooler such as myself could have told them that something like this would happen. Especially in an election year, why would a Republican-controlled government agency give a big win to a Democratic governor? Alternately, it was a conspiracy by all the private companies who are offering to buy the toll road in exchange for financing the project. It's ironic that the biggest debate of the past year has been whether the rail should go underground or above ground and now it's been rejected out of hand for reasons that have nothing to do with tunnels. Personally, I was hoping for the tunnel option, because tunnels are neat (and even Mitch Hedberg would agree that thirty seconds is the maximum amount of time you can depict yourself having fun on an above ground rail line).

For some, the allure of rail is to reach the airport. For others, it would connect workers with their jobs along a booming corridor of technology companies, law firms and other employers. And for others, it would create an opportunity to redesign at Tysons Corner, a sprawling 1,500-acre shopping and office district that planners envision as a Metro-connected downtown of streets, sidewalks, high-rise offices and apartments. 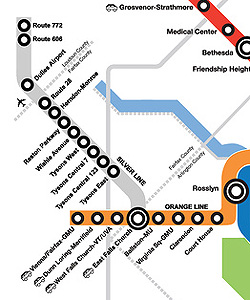 For me, the Silver Line would be pretty useless. Sure it would be nice to hop on at Reston instead of Falls Church for my biannual trip into D.C., but I live two miles from the airport already, and Tyson's Corner Mall is irrevocably broken -- a yuppy-filled zit on the face of northern Virginia that just needs a good squick. I'd sooner shop at Big Lots than go anywhere near the place.

The main reason I wouldn't regularly use the Metro (and never have) is that I would sacrifice a few extra miles of driving for an additional twenty or thirty minutes of travel time. Unlike my economical Dad who thinks nothing of driving fifteen miles down the road to Woodbridge to save ten cents a gallon on gas, I am perfectly willing to pay for convenience. Sure, that Metro ride might be more relaxing and use less gas, but that's an extra hour of travel time that I could have spent NOT traveling, enjoying the time at one end or the other of my trip.

Whatever happens with the plan, it won't affect my day-to-day life, but since we've already spent $140 million getting it this far, we might as well see if there's any way to salvage it. (Plus I hear that Fairfax would have to scrap their campaign to attract new residents, which revolves around the slogan, "Even this crappy county has a Silver Lining"). Here then, are three original proposals to save the rail project.

2) Silver Line With a Vengeance