It's Friday. You ain't got no job.

♠ Have you submitted a caption for Monday's Caption Contest

yet? If not, you're missing out on a chance to make a really easy $10. That's more than some trumpet players make in a week!

♠ The deadline for submission is today, which is handy since tomorrow is 12 of 12, and you'll be busy documenting your life to prove that it's more exciting than it seems. I wasn't sure if I would do 12 of 12 again this year, but then I realized that I'll be in Barcelona on the 12th of April, so it would be criminal not to.

♠ Speaking of criminals, I'm really tired of all the caucus coverage in the media right now. Caucus rules are so outdated that you might as well create a Survivor Immunity challenge involving a two-foot stick, an apple, and the rectum of a hog to get the same effect. Plus, it would be really nice if just one person steamrolled every vote so the losers could go home and save billions of dollars that will be wasted on campaigning instead of vowing to fight on because "it's a close race". Every politician is equally as shady and untenable as every other politician in the world, otherwise they wouldn't be running for anything. That's why there's a special place in hell for politicians.

♠ It must really suck to have a special place in hell reserved for you. I'd feel bad enough knowing that I didn't make it into heaven without also hearing that I'm a mentally-challenged evildoer.

♠ Speaking of mentally-challenged evildoers, an Undead rogue tried to gank me while I was on an escort quest and the escort kicked his ass. 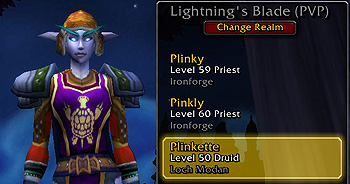 ♠ That level 34 druid I mentioned last Friday is now level 50 and powering through the old worlds. It's really easy to hit 60 now, because there are so many new towns and quests throughout the land, and the last patch increased the rate that you level between 20 and 60. For me, the most boring parts of leveling were from 34-38 and 42-48. Nowadays, a quest like "talk to the guy standing next to me" never nets less than 1000 XP, and "let the dwarf out of the Outhouse" gives you 6600 XP.

♠ I may be a poor judge of measuring though -- just last week in a game of Cranium, I thought that the tall, skinny milk jugs were a gallon and came up with some crazy answer like "16 pints in a gallon". However, it is true that there are 16 pirates on a galleon.

♠ Speaking of galleons, I'm rereading the Harry Potter series and am somewhere in Book 4. I haven't read Book 7 since it first came out, so I want to reread the entire series in a short time span. I'm much more impressed with the early books now that I know the ending -- I used to think that the first three books were just written for fun and the fourth book was the "whoops, I'd better start tying all this together and make an endgame" book, but it's much more apparent now that even Book 1 foreshadows much of the plot.

♠ This weekend, plans include the newly-erected Dogfish Head Brewery in Falls Church, possible romping in D.C., and assistance with piano-moving in Chantilly. I bet a piano holds at least 16 pints. I will also invent a unique method for solving quadratic equations with sightsinging, and hit level 54. Have a great weekend!