at least 75% as tasty as Tuesday Tenders

♠ I'm highly satisfied with my new Canon Powershot A650 IS. Taking quality pictures is so simple that a handicapped three-toed sloth (hence, it has one toe) could do it, and the batteries last for several days of heavy usage before requiring a recharge. The only negative (note the photography pun) I've found so far is that the memory card is inserted into the battery compartment, which makes it slightly more annoying than normal to switch it out.

♠ The picture below was taken at the Baltimore Aquarium last weekend, using the camera's special "Aquarium" setting (one of several special settings that includes Fireworks, Underwater, Indoors, and Psychotic Mime). I did nothing more than crop it and shrink it down to fit on my page.

♠ The Aquarium was incredibly crowded for a weekend with crappy frigid rain in crappy Baltimore, and the tanks that had the particular fish from the movie, Finding Nemo, were particularly swarmed. You could hear soccer moms from miles around shouting, "Creighton, stop riding the moving walkways and come look at Dori! Look it's Dori!" On one hand, it's nice that a movie elevates the status of nature, but on the other hand, fish are cool enough without having to refer to them by cartoon names.

♠ We considered bringing back some souvenir fish for Booty, but the aquarium security frowned upon it. 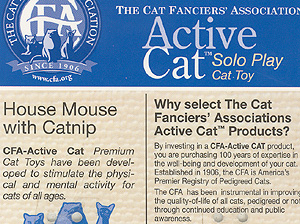 ♠ For Christmas, Rebecca got Amber a frou-frou specially-designed toy mouse. I was skeptical at first, since these gimmicks are akin to putting fruit in beer and selling it as Tequiza, but Amber has played with it every single day since Christmas for ten to twenty minutes a day (without any nudging from me!) I haven't regularly been enthralled with a toy since I cancelled my World of Warcraft account a year ago. 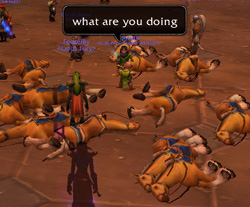 ♠ Speaking of WoW, I reactivated my account last month after reading a blog post by Sam about recent changes made to the game. I bought another month to check in with my old WoW friends to see what they were up to. When I canceled during the crazy work months in 2006, I never expected to come back to it (unlike some players that are habitual cancellers like Jaood and Dokta). I especially should never have given away that 1000g to people in my guild. However, just a couple games of 59-Twink Warsong Gulch were enough to make me miss the game in general, and I now have an additional three months, and a level 34 Druid powering its way up to the expansion pack.

♠ I justify this diversion in two ways: 1) After I re-finish the third season of LOST, I'll be out of TV shows to watch (since I don't have cable) and 2) Rebecca is going on a month-long trip in February so I'll need something to do in the interim.

♠ This weekend, I'll be hosting the first URI! Poker game of 2008, where all of 2007's scores are wiped clean for a new generation of suckage. Since playing in the basement is a toss up between frostbitten balls or exorbitant heating fees, the game will be held in my kitchen, which can only hold about six players before people start contracting the tuberculosis from their neighbours.

Woman sues for her lewd commercial