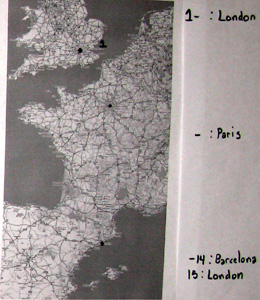 Everyone has a different reason for wanting to travel to Europe. For me, I could give a rat's ass about this little block of marble carved into a Renaissance codpiece or the birthplace of the guy who invented the alto clef. I want to experience the ancient (and Alexandria of the 1600s doesn't cut it), eat tasty foods, and see exotic vistas and architecture -- to be a foreigner on the outside looking in, away from the comfort of my home office with a cat in my lap.

In addition to these artistic goals, Paige has been bugging me to go to Spain and visit her ever since she and her husband moved there on March 18, 2006 to escape the military coup in Houston, Texas. Despite that, it took me until last summer to even get my passport, a slow and steady process that can take anywhere from one to six months. The day that it arrived last September was probably the first day I considered a Europe trip to be a tangible goal.

Rebecca and I had been talking about going to Europe for a few months, and our interest was further whetted by a Thanksgiving visit from Paige, who proceeded to give us eight million Europe-related bookmarks to read, and recommended the detailed city maps of Rick Steves (who is not related to Rick James or Steve James). Even then though, it was very easy to say "let's go to Europe next year" and not make any real progress. We finally issued the ultimatum that we would have plane tickets purchased by the end of 2007.

To do this, the first thing we thought about was what we DEFINITELY had to see while there, and what sort of budget we could have. Countrywise, we definitely wanted to go to Spain (so Rebecca could use her newly-learned Spanish to guide me around) and France (so I could resurrect my high school French, pieced together with random catch phrases from Alizée pop songs). For a third country, it was a toss-up between Great Britain and Italy. We wanted to go for at least two weeks, so we wouldn't be rushing around all the time, and wanted to try and meet a budget of $3000 per person. With this in mind, we looked at plane tickets.

We used various online travel sites like travelocity and expedia to determine which city it would be cheapest to fly into and whether weekends vs. weekdays mattered. We ultimately settled on nonstop flights to London (which eliminated Italy from our travel plans). This was also good because we'd be able to ease into the foreignicity in a country with English as the main language. We also found that it was cheaper to get a quick flight back to England to fly home, rather than get two one-way tickets from our start and end countries.

Based on the cost of the bookend plane tickets, we did some number crunching and figured that we could spend sixteen days in Europe (at $100 a day) after setting aside $1200 on major travel. We picked 3/31 - 4/15 as our window and suddenly we had the skeleton of a Europe trip in hand! We'll start in London on the 1st of April, and ultimately need to be Barcelona by the 14th.

Our next step is to determine how we'll be travelling in the middle. We're leaning towards the expensive $200 Eurostar train that travels from London to Paris in two hours which will cut back on our later travel budget. In France, we're thinking about getting the unlimited train pass, which will free us from calculating every train price, and will also give us a ready-made list of cities we can plan to visit for free. The downside of this is that we probably wouldn't make it out to some of our "Wishlist" places like Mont St. Michel, the abbey on the beach that becomes an island at high tide. I have always been a Brest man myself, but we might have to consider more southern cities like Montpelier.

If you have travelled in Europe, what are your thoughts on train passes?

Happy Birthday to Sam and Lisa!

Y'all fat, and y'all eat too much

Men get a smokin' tattoo