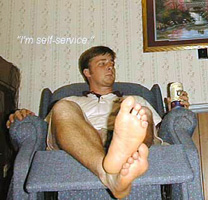 With Phil moving back to Williamsburg, Doobie marrying something that didn't come out of a 40, and Mike planning a move to the great Washington D.C. metropolitan area, it's become painfully obvious that I haven't done a very good job of keeping up with all of my readers' lives.

To rectify this situation post-haste, today's post will be an opportunity for you to let me know what you've been up to. To add a dash of creativity (which is much more fun than nutmeg) you get to tell me what you've been up to in the form of a local newspaper article for an award you have just won. Feel free to use any format you want and post in the Comments section, but if you prefer a Mad Libs approach, you can use the following template:

Brian Uri!, a resident of Sterling, Virginia and an established expert on getting Finale to notate the music the way you want it to, was presented with the Keanu Reeves Distinguished Award for Token Asianism at a grand ceremony yesterday evening. After attending school at Virginia Tech and Florida State, he fell off the radar, but all reports indicate that he has been quite successful in the past few years designing software for the federal government and watching TV shows on DVD.

Brian's life changed for the better last year when he tricked someone into being his girlfriend, and his future plans include going to Europe, playing World of Warcraft, and inviting all URI! Zone readers to visit Virginia for an awkward party where everyone stands around and pretends to have things in common. In his acceptance speech, he thanked Dan Shiplett and Alex, and closed with these noble words: "Exclamation points are fun! Leave a note in the Comments section!"

Movie sanitizer's next job is his own life

A corollary to the "wear clean underwear for the hospital" rule

Baptists have the biggest poops