a nostalgic look at memorable fragments from the original 2005 columns 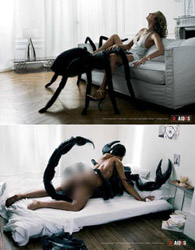 ♣ July 22, 2005 (the very first column): I always knew the French were a little wacky but now they've outdone themselves. The posters on the right are actual images from their new "Prevent AIDS" campaign. I have applied a Gaussian blur to the salient man ass, since that's not necessarily the first thing you want to see in the morning. Kids, make sure you don't have le sex with a spider, because that's how l'AIDS circles le globe. The previous sentence is the result of four years of high school French.

♣ July 29, 2005: Three times in the past week, I have mistyped "bridge" instead of "bride". I don't think I have a subconscious fear of brides (yes, I mistyped it just then as well, so maybe I do), although I do think it would be cool, if impractical, to have a mail-order bridge (some assembly required, river not included).

♣ August 12, 2005: There's a local company called College Hunks Hauling Junk. "You're not a real man until you go to the dump," Suzuki said. "That's my philosophy". I approve of the rhyming couplet approach to naming a company. Fashion designers opening outlet stores could be "Fops With Shops" and Florida-Mike could call his web design business "Non-Jewish Whites Making Sites". If I ever get around to starting my own record company, I would probably call it "Post Grad Stud Producing Duds" and payola my way into an Ashlee Simpson hit. Incidentally, I loved when she got boo'ed for her halftime performance last year, but I really wish the audience had gotten violent. How ironic would it have been if her career had ended with Pieces of Me? All over the stage?

♣ August 19, 2005: There's no stronger evidence of how stupid people are than reading about the clowns who chose to drive on the Woodrow Wilson Bridge last weekend solely because the previous construction warnings did not result in any gridlock (see Figure A). The reason there was no traffic last time was because morons like you stayed home. Moron. In keeping with a recently popular theme of this site, I think the Department of Transportation should have distracted the gridlocked drivers with roadside exotic dancers, in a show aptly called, "Tits and Asphalt".

♣ October 21, 2005: Amazon.com reader reviews are occasionally very entertaining. I can see the advertising slogan now: Friends: The Complete Tenth Season - Not as gay as you expected!

♣ October 28, 2005: McDonald's runs their burger meat through a metal detector before shipping it out in the name of quality. I don't know if this is a new initiative since 9/11, but it's a good idea -- a terrorist explosion of a Happy Meal would be abominable. Get it? Ha ha!

♣ November 4, 2005: That's actually a picture of a lady siphoning bull semen up there. I did a search hoping to find a funny cartoon of some kind and ended up with that. Google Images wins again. I'm not sure why she needs such thick ocean-blue gloves, but maybe she's trying to trick some seamen.

♣ November 11, 2005: The hardest part of writing sections of my updates the night before is remembering whether to put verbs in the present or past tense. Sometimes I just give up and use both interchangeably. That's probably why people say I'm two tense.

♣ December 16, 2005: The crazy Turkmenistan president is at it again, demanding penguins to be included in his desert zoo

. I think the penguins would be more comfortable in his ice palace than the 104 degree desert, unless he plans to hire people with portable fans to keep the birds cool at all times. When I become the eccentric king of Antarctica, I will be importing various marsupials from Down Under for my Arctic Zoo, and hiring people to follow them around with red heat lights. If you would like to be one of my Koala Lampers, please let me know.

♣ December 30, 2005: Here's another picture of Kelley from 1998 when he was a freshman and passed out on the Abbott bus on a Wind Symphony trip (not to be confused with the time he passed out in the bathroom during the Super Bowl while taking a poop). Both he and Shac, the guy next to him, had 40s clutched in their dirty mitts, but I edited them out so the pictures could appear on the trumpet web site, which was too closely affiliated with the marching band to show people consuming large quantities of alcohol. The number of 1998 pictures with hands in strange positions from cropped alcohol led people to joke that the trumpets had their own gang sign. There are more photos such as this one on my Photos page, some of them proving that I have no business being behind the viewfinder of a camera.

♣ Have a great long weekend!

Have a tasty corgi

Bin Laden is not leading any parades