you can tell it's the weekend because of all the clubs

♣ Wednesday's LOST was really good, and set up great expectations for the last three hours of this season. In a peculiar-for-a-money-grubbing-media-network move, ABC announced that LOST would have three remaining seasons of sixteen episodes each, so we'll finally figure out what Jack's tattoos mean and why Hurley's still chubby when I am thirty years old. 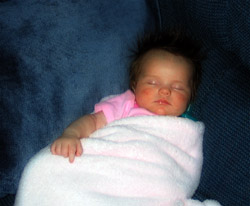 ♣ Eleanor didn't think too highly of the episode. In fact, she slept straight through it and her Bon Jovi / Rod Stewart hair grew another four inches. 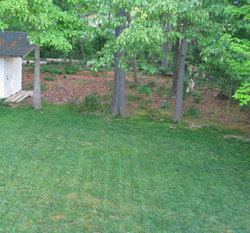 ♣ I mowed the lawn after work yesterday, because it's in that fast growth stage where you have to choose between emptying the bag every fourteen seconds or mowing every six days. In this picture, you can barely tell that there used to be a massive tree stump in the middle of the yard, although you can see that the grass is a little darker in the back corner where I bury all the bodies.

♣ After mowing the lawn, I finished the fifth and final season of Six Feet Under. The series is big enough to warrant a separate Review Day next week, but in a nutshell: it's slow to build, requires patience, pays off well, evokes deep thoughts, and isn't for everyone. I also thought the series finale was point-perfect -- one of the most fitting conclusions to a series I've ever seen.

♣ Now that Six Feet Under is old news, I have a new Amazon bundle arriving -- the third season of The 4400, and two technical books on XSDs and XSLTs. The last tech books I read were on AJAX and Ruby, and I never finished either one. A couple years ago, I was much better about reading tech books from cover to cover. I blame my shortening attention span on MTV and the GOP.

♣ Speaking of Tech, the Virginia Tech graduation is tonight. My sister's husband, Dan, is graduating from vet school and getting a bunch of awards for being the best horse whisperer, and Anna's little sister, Emily, is finishing her undergrad. Congratulations!

♣ I originally wasn't sure if I could make it down because of work, but our schedule faced some unexpected extensions like a lady who falls asleep in the hair salon. Ultimately, I decided not to go down anyhow, because I'm not yet ready for the whole shooting affair to become a set of talking-head talking points. I bet every single speechmaker will reference it at least one time -- a more morbid soul could probably play speech Bingo with words like "tragedy" and "Virginia Tech spirit", and win in short order. So in lieu of graduation, I took today off from work and fired up the grill for a full day of tofu burgers and desert wines.

♣ Actually, for the first time in a while, I have no plans at all this weekend -- no home renovation, no work, and no opportunities to overthrow foreign governments. The lawn is mowed, the house is clean and Amber is keeping an eye on the new sink for leaks. To take full advantage of this dearth of responsibilities, I plan on spending the whole weekend with Rebecca, and possibly Booty (who wants to go hiking and catch a fish to eat raw).

, the series where you take twelve pictures of your day in compromising or extraordinary situations to fool readers into thinking that life is more exciting than they expect. Since it's a Saturday, you'll be able to see me do fun things like pump gas at 7 in the morning. Join in!

♣ Happy Birthday Mike Stafford on the 12th, and Madeleine on the 13th! Have a great weekend!