The street I grew up on was intended to be a major thoroughfare between Seminary Road and Duke Street in Alexandria. Before this plan could come to fruition, the rich folks in their wooded manors at the north end of the street managed to block it, not wanting additional traffic near their diamond tennis courts. The result of this was that I lived on a dead end street wide enough for five lanes of traffic, which was perfect for pretending to know how to skateboard. Pickett Street stops and starts five or six times as it wends through Alexandria, which meant that the chances of our UPS deliveries arriving on time was roughly one in five (on the rare occasions that the driver didn't end up on Pickett Road in Fairfax).

In Alexandria, anyone who lived more than a mile from the junior high school got a free bus ride. Living on a street that was essentially a dotted line meant that we were more than a mile from school by road but less as the crow flies (but when was the last time you saw a crow fly in a straight line? Crows in my neighbourhood circle aimlessly and eat carrion. They're loud too -- I can hear them carrion on all morning).

Looking at the Google Map above, you can see that cutting through the woods on my street shaved a good quarter of a mile off my trip. You can also see that botched construction work in the late nineties turned my school into what looks to be a staple gun or a buck-toothed dinosaur head. It doesn't look much better from the ground, because apparently Alexandria thinks "urban planning" is figuring out which Metro stop to get off at when you visit the Smithsonian.

This wooded shortcut wasn't much more than an unpaved drainage ditch, and used to be controlled by a redneck and his dog, living in a tiny house at the end of a dirt road within spitting distance of the million dollar mansions. After his house burned down, it became the de facto place for kids to skip school and smoke cigarettes, as long as you could avoid the mother of our friend, Cheryl, who lived one house away and made it her mission in life to keep kids out of the woods. 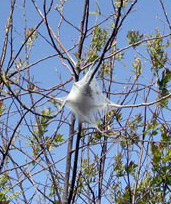 I would walk to and from school with Aaron Ulm, and occasionally Allen Lutz, our instrument cases banging at our sides as we raced down the muddy hill, dodging poison ivy and early morning spider webs. When Cheryl's mom wasn't giving us the evil eye, Aaron would sneak into the burnt-out shell of the house on dares to borrow from the redneck's stash of charred Playboy magazines, or we would knock really gross bagworm nests out of trees into the water and set them on fire, because forest fires are cool.

In ninth grade, we found a squirrel that had been hit by a car and managed to stumble into the woods before dying, and spent the next three weeks before school watching it decay. Maggots are not nearly as cool as forest fires, unless you're twelve years old.

Strangest disaster of the 20th century