the 82nd edition of this column since July 2005

♣ On Wednesday night before LOST, I ordered some pepperoni-mushroom-black-olive pan pizza from the local Pizza Hut delivery franchise. When the carrier came to the door, he glanced at his receipt and we had the following conversation: 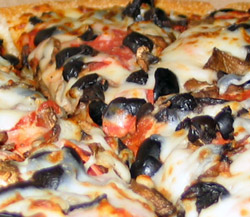 ♣ I'm not sure how I ended up registered as DUDE in the Pizza Hut computer system, but it probably happened back in 2004 when Eric lived here and ordered pizza every night. Alternately, maybe a stoned surfer broke in one afternoon and had the munchies.

♣ To me, "the munchies" always sounds much more ominous than it actually is. It evokes memories of really bad animatronic movies from the 80s where unkempt, hairy critters of the malevolent variety eat someone's gall bladder in an appropriately bloody fashion.

♣ I never owned one of those plastic troll dolls with the long hair in the 80s -- I always thought they were pretty dumb, and even as a pre-teen I was pretty elitist. 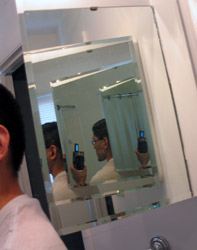 ♣ Last night I trimmed my own long hair so as not to become one of the very trolls I despised in my youth. I've been cutting my own hair for almost a year now, and have the technique pretty much down -- the weedy patch right at the back-center of my head is the hardest, but I accomplish the haircut by using a complex series of mirrors and ambidextrous techniques. This is the same way they faked the moon landing photos, and also how you write Minimalist music.

♣ When not shaving my head for that yellow supremacist look, I've been busy watching the third season of The 4400 and reading about the XML Schema specification (which I already know a lot about, but not in any particularly orderly fashion). To tie the computer stuff to my musical side for greater relevance, I've also composed a two-piece period song in the style of Stephen Foster called "Beautiful Schema", and a jingle for the Twix candy bar, "made with real XML".

♣ I am not a big caramel fan -- it's too viscous and tastes like you're chewing on wood glue that hasn't quite dried. Then again, I never ate library paste as a kid either.

♣ I was fastidiously clean as a kid -- besides never eating library paste or household cleaners with the Mr. Yuck sticker on them, I never did things like fill my pockets with worms and sit on them, or lick bird poop on dares. Even though I spent most afternoons digging in the dirt pile, I would always want to come in and wash my hands when I was all through.

♣ This weekend I plan on doing a little adult dirt-digging -- weeding, moving some plants, and trimming the obnoxious blades of grass that grow right next to the shrubs where the mower and the weed whacker can't get to them. I also have social activities scheduled for Saturday night and a nap scheduled for 1:42pm on Sunday. I haven't had a nap in a few weeks now, and am long overdue.

Bubbles n' Babes washes your convertible with the top off