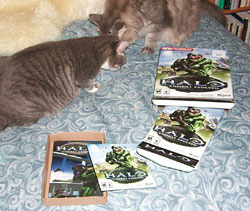 In October of 2003, I purchased the game, Halo, for the PC and was more amused by its Russian-doll packaging than the actual game (which might have been the most boring single-player first-person-shooter since Duck Hunt, no matter what Doobie says). The box was roughly the size of an young armadillo and forced you to tear through multiple layers of shrink wrap and smaller boxes to reach a tiny jewel case containing the single CD needed to play the game. P.S. Booty was such a fat ass in 2003.

The only reason I was reminded of this game is that I received a wedding invitation for the Jack & Kristy wedding by post. Although the matrimonial avalanche ended a couple years ago, I still receive a few snowball wedding notes from people like Kathy and Chris who came late to the party of wedded bliss and free stuff. 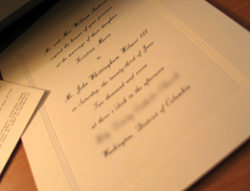 Regardless of how environmentally conscious the happy couple are, every wedding invitation is (by ancient law jointly sponsored by Hallmark and Xerox) required to include so many random pieces of paper that the entire package is a delivery system for nuptial anthrax. The calligraphy literally falls in your lap and infects you with espousal spirit before you can react.

First, of course, is the outer envelope with the postmarks and the addresses, conveying the crucial information about whether you should bring your significant other through the front door or have them disguised as a waiter until such a time that the open bar has been thoroughly abused and no one will notice one extra BEEF or CHICKEN platter. Next comes a second envelope with nothing but your name on it. Safe wedding advocates know that two envelopes will better protect you from wedding-transmitted diseases than just one -- some are even embossed for her pleasure.

Inside this envelope, you are first greeted by a tiny sliver of tissue paper, which is too small to catch any happy tears you might cry, so it's probably a prototype of Mr. Hoo's paper innersole from the book, The Westing Game. Under the tissue paper is a full-sized card from the parents of the bride announcing the marriage (since brides are incapable of speaking for themselves, and the parents figure they should have a little involvement given the fourteen goats they traded).

This seems like enough stuff to announce a wedding, but wait! There's more! Act now and you can receive an RSVP card with "M. _____ will ____ attend" stamped on it, and a choice of livestock to dine with (or upon). I'm still not sure what you're supposed to put in the second blank if you plan on attending, so I put "seriously". Beneath this card is a self-addressed-stamped-envelope (SASE) which was the staple of every infomercial from the 80s for CDs of MONSTER BALLADS. If there's still room in the envelope, you'll find more cards containing directions to the site, information about parking, and then (on a separate page) the location of the reception. It seems to me like all of this information could probably fit on a single piece of paper with room enough to spare for dotted lines which would allow the invitees to reuse the card for Origami, but what do I know? I'm just a little BU, and the wedding tradition is definitely controlled by the Mafia and goes back millions of years. 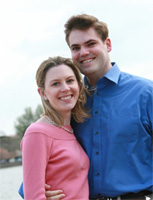 There's nothing else to do besides say CONGRATULATIONS and return my RSVP. Got any chicken?

His girlfriend, who was not arrested, told authorities she had been trying to dump him.