May is easily one of the Top Twelve months of the year, and definitely makes the Top Three in my book. It's the time when the weather finally decides to stop dicking around and the days are consistently warm -- when you can leave the windows open by night and watch all the sun dresses go past by day. The heater turns off but the A/C doesn't turn on, and my electric bill drops by a good $40 per month, which is just enough to buy three Tatu CDs to explode in your microwave for the good of humanity.

During college and grad school, May was always the month I would return to the familiar environs of northern Virginia for the summer. At Virginia Tech, the semester always ended during the first week of May, signaling the start of useless PEPCO internships and endless barbeques. (People in Florida were lazy, so school tended to end in April, presumably so all the European students could start their jobs at Disney World). 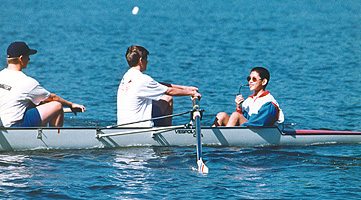 In high school, the year didn't end until the middle of June, but May was the month that teachers unofficially stopped caring about teaching. May was especially fun for the Crew set, because every single weekend was booked up with a regatta ("boat race" if your annual income is less that $100,000) at some exotic locale like New Jersey or Canada. Because the races spanned multiple days, anyone who did Crew was immediately exempt from Wednesday, Thursday, and Friday classes of every week. A rower on a good boat could end up attending just ten days worth of classes -- I did something similar in college but it wasn't exactly "school-sponsored".

I mentioned Crew month last year at this time

, but I didn't mention the "coxswain loophole". You see, coxswain is Latin for "tiny person for making drives boat", and these are in very short supply in our nation of fatties. Because coxswains occasionally met with mishap on the road (kidnapping by rival teams or laryngitis), the team was always careful to bring one or two backup coxswains along. By being a good coxswain, you could end up going on every single road trip, even if your own particular boat was so slow that it could only win the race after the one it was in. As a backup coxswain, my trip generally consisted of sleeping on the bus with my headphones on and eating at McDonald's three meals a day while the anorexic rowers spit in cups before weigh-ins. This was a far better existence than going to school and learning stuff.

Which is your favourite month?

Dumb people can be rich too

Cook said he was to receive a 1994 Chrysler New Yorker for his role in the scheme.