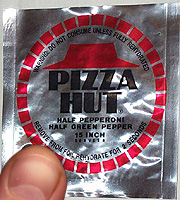 In my high school, there were two paths to a diploma: the Standard path (which generally included a course with the abbreviation "ec" but not in the context of "ecology" or "eclampsia") and the Advanced path. Because of grade inflation, the Advanced track was actually the common track that most students followed, with Standard being the new Subpar. (The same is happening in the food industry, where a Large pizza is now roughly the size of a prematurely-born opossum).

To qualify as an Advanced student, you had to meet the language requirement which, in the grand American tradition of failing to understand basic math, required three years of a foreign language, or two years each of two separate languages. Having been a master scholar in the universal language of loooove since childbirth, I wasn't too keen on adding yet another language to my repertoire, but relented so I could go to a really good state college.

Given the choice between French, Spanish, German, and Latin, the only logical choice was French. I figured that I could learn German on my own time since all you do is take random words and string them together into even longer words (the same applies to writing a medley), and I wagered that Spanish would pretty much be a dead language in this country within a decade. That left French and Latin, and the girls who took French were far cuter.

I started French I in eighth grade under Madame Gibbs. We used the textbook, On y va!, which is a colloquialism that vaguely means "Here we go!". The main thing I learned from this textbook, other than how to order a Coke in France (je voudrais un coca) was that you should never use slang in a language book title because the teacher will have to spend the whole first class explaining why it can't be directly translated because her students are all literal pissants (fourmi litt?rale d'urine).

Every student had to have a French name, for total immersion, so my French name was Brian (je m'appelle Brian) -- the last syllable was Frenchified so it sounded like Lil' Kim trying to be hardcore by making goose noises in Lady Marmalade

. As the years went by, this name became corrupted into Brioche, which is also a French pastry that looks exactly like a boiled blister. 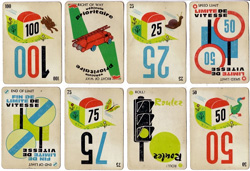 Once we were well-versed in ordering various French dishes and swearing (tu manges mon merde) we went to French II, where we watched ridiculous "learn French" videos, played the card game, Milles Bornes, and had Language Lab. During this session, giant booms lowered out of the ceiling with enough headsets for the entire class, and the French edition of Ben Stein from Ferris Bueller asked us questions. No matter how many people were in the class or how softly you spoke, the teacher could always figure out when you were mispronouncing something or not answering -- she would use her Voice of the Gods skill to correct you over your headset without anyone in the class knowing. Sometimes I would intentionally throw a question (je ne sais rien) to see if she was really paying attention, and she always was. 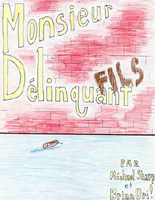 I don't remember a single thing about French III because the teacher was a troll (in the Brothers Grimm sense, not the hairy plastic doll sense), but I think it mostly centered around learning a bunch of verb tenses that no one ever needs in real life (that no one might ever be needing in real life). However, something in that class convinced me to be an overachiever and go back for a FOURTH year of French, which was quite fun. All we did was read and write stories for the entire year. In the tradition of Mr. Square and Mr. Triangle, I wrote a story called Mr. Juvenile Delinquent which you can read here

(my partner contributed by doing all the colouring). You can probably understand most of it even if you don't speak French.

Since that year, I haven't taken a single language class, and what remains of my French vocabulary comes more from the occasional Aliz?e song than any preserved education. I have picked up a few choice words of Tallahassean -- for example, the proper response to "Thank You" in Florida is "No Problem", not "You're Welcome", and when someone asks "Have you been to the Walmart?", you have to follow up with "You mean today?" before you answer.

Man who stayed up 266 hours rises to bad news

The employee asking the question traces a circle in the air with his pen while pronouncing the word Angus.