there are no plot spoilers in this review, although the format of the final scene is discussed 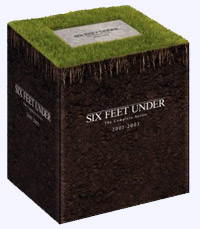 Six Feet Under is a five-season, sixty-three episode HBO show and Mike "I hate movies and pop culture" Catania's favourite series of all time. With such effusive praise, I figured I would give it a watch to see what all the fuss was about. HBO shows (like The Sopranos) are generally so expensive that I would normally wait for my parents to get it and then steal it from them, but luckily Amazon had a package deal containing all the episodes and two soundtrack CDs for about six cents per minute. That (plus Mike's offer to buy it off of me if I hated it) convinced me to pick it up. Plus, I am all about the "boxed set".

This show is rather hard to "summarize for a friend", but on the surface it's about a family who operates (and lives in) a funeral home. Each episode begins with the death of a non-principal character, and this death is used as the backdrop to thematically tie an episode together. The story is not highly plot-driven -- instead, the characters are allowed to grow and relate in a believable manner, which also made me as the viewer care about their fates.

The believable, well-acted characters are the cornerstone of the series' success. Although they occasionally get into made-for-television situations, they react and cope with events realistically. There is no truly sympathetic hero amongst the characters -- everyone has shades of grey, and everyone struggles to be good while making mistakes. This allows the writers of the show to introduce many different thoughts about life and death, right or wrong, relationships, love, mental illness, and even the minutia of daily life in a completely nonconfrontational way.

To me, this was a key element, although I couldn't quite put my finger on it for the longest time. Where another show might approach these issues with a lack of subtlety or blatant preaching, Six Feet Under takes a very understated approach by taking characters similar to people we might know in real life and allowing them to work through the issues for us. I often found myself thinking about the questions raised long after the episode had ended, without ever having that indignant feeling that I was being manipulated or force-fed by a television show. It's like the exact opposite of any sitcom with a laugh track that goes "Awwww" when a baby is shown off.

The show isn't perfect. Like all good HBO shows, it has an overreliance on dream sequences. In the beginning, these sequences are very apropos -- for example, the main character might be alone with a body during the embalming, and an imaginary conversation with the deceased is used to vocalize the character's inner monologue to the audience. In later seasons, it tends to get pretty gratuitous (though not to the extent of Tony Soprano spending twenty minutes walking around a beach looking at talking fish heads).

Also, two of the main characters are an on-again-off-again gay couple. As their storylines mature, the gay factor is always handled tactfully, in a normal, believable fashion, but for the first couple of seasons, the writers tended to go overboard with gratuitous scenes of gay lifestyle which might make many people uncomfortable.

Six Feet Under is not my favourite show of all time -- there was never a moment where I was hooked and had to keep watching -- but it is very good. After watching the first season, I wasn't particularly excited, but was interested enough to keep going. By the time I'd finished the third season, I had become so invested in the characters that I couldn't imagine stopping in the middle. I was happy to find that, after such a slow-paced build up, the final season and the final episode were uniformly excellent -- Six Feet Under is the Mahler of HBO shows, if Mahler had written intimate chamber symphonies.

The final episode concludes with a montage of the lives and deaths of all the main characters, and is surprisingly poignant if you have taken to the characters. If I weren't such a manly man, I would have almost felt compelled to cry.

Final Opinion: B+ Worth a purchase, or even a rental, unless:

No romance for lovesick albatross