♣ Police are on the lookout for a criminal. Call the station if you've seen him.

♣ Never have I ever called a television hotline or tried to be the ninth caller in a radio contest for random prizes and fame. I have called radio stations twice for requests, and both times they had never heard of the song. Stupid radio stations playing only the songs everyone already knows.

♣ This three-part movie trilogy of Lake and Titan's last visit to my home has a recognizable and quite apropos song for its soundtrack:

makes me smile, and not just because the cat looks like a chubby long-haired version of Amber. Amber is far cuter.

♣ All kittens are cute, but adult cats really aren't that cute at all. However, you will always find your own cats to be cute regardless, because you watched them grow up from kittens and associate their former cuteness with the less cute animal they turned into. This applies to human kids too. Who would put up with them through adulthood if they didn't have big saucepan eyes and make funny sounds?

♣ If I go to bed late and want to sleep in, sometimes I will feed my cats a little midnight treat of food on the sly, which screws up their internal food counters and prevents them from waking me up at my usual early hours. I don't find this to be bad parenting in the least bit. 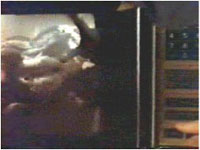 ♣ I probably won't do this if I ever have kids, because I'd be afraid that they'd turn into Gremlins and I'd have to trick them into the microwave and turn it on to protect myself from being mauled.

♣ I have not bought any tempting treats for the neighbourhood kids because I barely get a soul on Halloween Night. Rather than buy a box of tasty candy for one-year-old kids who have no idea what's going on and fourteen-year-old kids who are too cool to have a costume, I'll just hide in the back of the house with the lights out and take all my candy to work.

♣ I don't even have a costume, but it's not a crisis since I don't plan on attending any costumy affairs. I did promise that this year's costume would somehow involve a ukelele, since the ukelele from last year's costume didn't arrive until after Halloween was over. Give me a table cloth and I could be a ukelele-wielding superhero.

♣ Everyone says that that Heroes show is great, but I have yet to watch it.

♣ This weekend, I'm going to become an expert on the Spring MVC Framework since it's a likely candidate for the next version of our applications at work. I never did finish the book on AJAX and never started the book on Ruby, but at least those books look impressive on my shelf. Besides that, I may go to Kathy and Chris' for poker one night as well.

♣ Have a superb end-of-October weekend! Keep guessing those Tunes from yesterday!