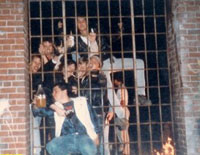 In an ephemeral span of nine days in February 2003, I wrote eight letters of recommendation that would ultimately change the course of Man's evolution. You see, Florida State had built an all-inclusive dormitory specifically for music majors, where students could live in high tech suites with computer labs, practice rooms, and classrooms all in the same building. The concept was very similar to that of a mental hospital, but with slightly more sanitary conditions. As an aside, it should also be noted that Virginia Tech tried the same type of idea, and ended up with an abandoned building that used to be a campus hospital, with one classroom and forty-seven used hypodermic needles littering the floors like pointy presents for piccoloists.

Now it wasn't just any old music major that was allowed to stay in this dorm at Florida State -- you had to have impeccable credentials and be able to read alto clef, which meant that most of my "half a semester behind the curve didn't quite pass the entrance exam" students were already at a disadvantage. To remedy this, a few of them came to our hero, their favourite instructor as evidenced by the student evaluation form below.

This was the first time I had ever been able to directly mold the course of innocent students' futures (apart from the time I taught a class that tenor clef was called the K clef because it transposed the standard A to G notes to a new set from K to Q) so I took my responsibility quite seriously. First, I asked them all why they wanted to live in this magical dorm of candy and unicorns. I had to ask, because I was having trouble thinking of good reasons for myself. Why would you want to live with people you have to attend every class with already, people who you're probably staring mental daggers at during rehearsals because you think they suck and you should be first chair? Wouldn't living in a music dorm be giving yourself tunnel vision instead of experiencing the full college experience? Who wants to live over a tuba practice room?

The only reason I could come up with was "sometimes cute girls drag themselves out of bed and stumble into morning classes in their pajamas" which did not seem compelling enough to deserve a change of residence. Then again, I could be biased coming from a computer science background -- living with one computer science major was enough for me and I would have dropped out of college the minute someone suggested a dorm full of nothing but guys with the social skills of that one flatulent dolphin in the pod.

The difficult part of writing letters of recommendation is not making an average student look decent or going overboard with praise. The kicker is trying to make each one a little different than the last. This isn't so noticeable with two or three, but by the time you hit number eight, you're struggling for ideas like John Grisham after taxes. Ultimately all of my letters followed a similar pattern to this one:

This letter is in regards to Leeroy Brown, who is applying for residency in Cawthon Hall next year. This is the second semester that I have been Leeroy's instructor -- he was enrolled in MUT 1001: Music Fundamentals last semester and is currently my student in MUT 1241: Sight Singing and Ear Training I.

Change the name for each letter, and I'm good to go.

Leeroy has an extensive background in theatre and dance, but did not have any formal music theory training before he came to Florida State University. However, this did not deter him from choosing the B.M. Musical Theatre track over the B.F.A. track in Theatre. He chose this more difficult path so he could have a full understanding and appreciation for music theory, and possibly compose his own music at some point in the future.

Or I have no idea why he picked that track, except that taking the B.F.A. track would get B.F.A. embossed on his diploma, and that's just going to lead to unfortunate misunderstandings in interviews. Smart choice, Leeroy, smart choice.

Leeroy started Fundamentals with a 100% on his first quiz, but his grades began to drop as the materials became increasingly harder. However, he was one of the few students in the class to take advantage of extra help, and put in extra time to make sure that he understood the material. Other students with declining grades either changed their major or learned just enough to succeed on exams. By the end of the term, Leeroy had bumped his quiz scores up to a competitive level against the class average.

"Competitive level" is a nice way of saying that if his grade and the class average had a fight, his grade would last at least two rounds.

So far, Leeroy has perfect attendance in my sight singing class (which is held in Cawthon). The atmosphere of being surrounded by like-minded musicians has had a positive effect on his studies, and I believe that it would be beneficial for him to live there next year.

Notice my subtle segue into mentioning the dorm -- now you can see where those crazy Friday Fragments skills came from!

The best part is that I don't even know if any of them made it into the dorm the following year, or if they all dropped out of college and danced tables to fund their out of control meth habits.

Dooce in the news