the reason why your kids are so ugly

this month, but time flew by like Harry Potter to an Angst-Ridden Teenager Conference, and it was almost noon by the time I realized it was the 12th. You can still visit his site to see pictures from everyone else's day. 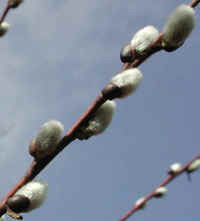 ♣ As for my own, it was about the same as usual. I got to work at 6:09 AM (I know the exact time because you have to sign in and deactivate the alarms if you're the first one in), worked until 1, came home and made a ham and mayo sandwich with three pieces of 97% Fat Free ham, worked for another two hours and then went to Boston Market for dinner with Anna and Becca. My life would not make a very exciting Choose Your Own Adventure book.

♣ When I was a kid, I wrote a manuscript that had some resemblance to a CYOA book, except that every page had a two-option question and one of them always led to death. It was not a very forgiving scenario. If you could chart the flow of the narrative with a plant, it would have been a pussywillow.

♣ Also from my treasure trove of childhood memories, I recall watching the movie Willow over and over. Eighteen years later, I don't remember much about the plot other than the fact that there was a midget who sucked at magic, a baby, and a witch. I certainly loved it back then though, and childhood movies always retain a special magical quality as long as you never try to watch them again as an adult.

♣ It's crazy to consider that kids of today have a completely shifted spectrum of childhood movies than I did. Most kids who are entering their teen years now have probably never even heard of those 80s classics like Howard the Duck, Back to the Future, and Gremlins. What will the world be like when you exclaim, "One point twenty-one jigawatts!" in a crowded room and receive only blank stares in return? Won't it be sad when kids cite The Grudge as the scariest movie from their youth rather than Friday the 13th?

♣ I remember one of Encyclopedia Brown's Two Minute Mysteries that occurred on Friday the 13th -- the questioned crook mentions that, like clockwork, he always goes to the bank to pay his rent on the first of month. The Inspector realized he was lying because whenever a month has Friday the 13th, the 1st is a Sunday.

♣ Friday the 13th never really bothered me because I'm not very superstitious and don't care about numerology other than the "oh neat" factor (like the way the digits of factors of 9 add up to 9).

♣ This weekend I'll be working again, and using the off hours to clean up the pigsty that is my home harem. Why just yesterday, I found a dirty fork on the floor! Or not so much the floor as in the sink, soaking in warm, soapy water. That will never do.

Gaming with your brain