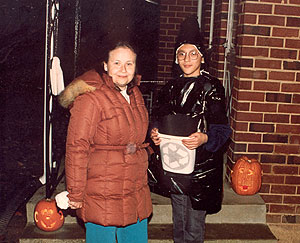 In 1992 (ninth grade), I went trick-or-treating as a Candy Recycler (a.k.a. teenager who is too cool to think up a real costume but still wants candy). The recycling sign hanging off the trash can was a carry over from my Environmental Science merit badge and is still highly useful at parties. "Do you recycle beer bottles? OH."

I've gone trick-or-treating as both a wizard and a warrior (but never a rogue). Coincidentally, the walking stick I used for my wizard costume and the wooden warrior sword made by my grandparents' neighbour were both later destroyed by situp-farting Tony

who tried attacking a cinderblock wall with them. I was not happy about that. 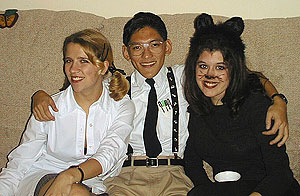 In 1999, I went to a party at the Tuba House. I was a Math Major (complete with tape on the bridge, high waters, and impeccably combed hair), except when I was talking to Math Majors, in which case I was a Physics Major. Nikki was a schoolgirl, but everyone kept thinking she was Britney Spears -- since she was into peer pressure, she ran with that instead. Liz was some kind of sexy cat.

In 1994, I climbed up onto the roof of my house with a giant bag of leaves. When the passing populace knocked, I scared them with a homemade ghost on a bungee cord and then lowered the candy down, occasionally stopping to dump leaves on parents. I said nothing, communicating only with the buzz of my trumpet mouthpiece. The professional trumpet player from down the street took the opportunity to explained to his daughter how the embouchure worked. 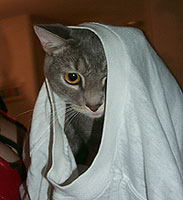 In 2003, I was a gangster. I picked this costume because I could also wear it to work without getting strange stares in traffic, or walking about. Booty was a ghost, but only for about ten seconds.

One year in elementary school, I wanted to get one of those orange and black shirts that said, "This is my costume", but my parents didn't want to spend $14 on a T-shirt that I would only wear once a year, so I had to write it in black marker on a white shirt. This did not achieve the desired effect whatsoever -- no one could read the shirt so I had to hold out stretched out as if I were concealing a pregnancy at every house I went to.

In 2005, I was a ukelele-playing Hawaiian without a ukelele, but with a coconut bra, which was much more crucial.

Manatee loves Memphis a little too much