nuggets of wisdom made with all yellow meat 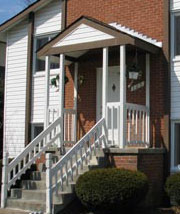 ♣ I'd originally planned to spend yesterday afternoon painting my front and back porches with my dad, but the grumbly fog with its 95% humidity shot that idea down. Instead, I spent the afternoon working from home. Luckily the sprint-like conditions of the past three weeks are now wound down like an exhausted grandfather clock.

♣ As you can see in the picture, the stoop of my porch is larger than the picturesque roof and railing above it. There's three square feet of useless space outside the railing on either side of the porch which I only use on a yearly basis to set up jack-o-lanterns. I think at one point in the house's twenty-eight year lifespan the two widths matched, but then the wood shrunk after years of being left in the sun for too long, much like a raisin or an old person in Florida.

♣ I often have trouble with buying clothes that seem safely oversized in the store but then shrink ridiculously in the first wash, preventing me from wearing them even once. I think the lesson I'm supposed to learn is to just stop washing my clothes. Either that, or wear the clothes I already own until the end of time. 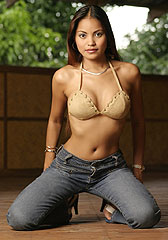 ♣ I really need to buy a new pair of jeans -- my daily wear pair has the telltale frayings of a hole forming on the lower right posterior, and while having one butthole is necessary for bodily functions and evolution, having two is just impolite to random passerby.

♣ That's not me in those jeans in the picture. That's merely the second picture that pops up when you do a Google Image search for "jeans". I figured most of you would rather see a picture of that than my own jeans.

♣ When I was a kid, the first part of the jeans to go was always the knees, resulting in those iron-on knee patches that permanently prevent you from ever bending your legs again. Now, the ass of the pants is always first to go. This really reflects on my sedentary lifestyle, in which I spend eight to eleven hours per day sitting in an office chair.

♣ My posture in office chairs is uniformly horrible. Over the course of the day I'll gradually slouch lower and lower in the chair until the lumbar support supports my shoulder blades and my legs form a hypoteneuse with the chair and floor. The only way to prevent this slippage is to sit Indian-style in the chair or get a chair seatbelt. I haven't tried the latter yet, but I've thought about it.

♣ It amazes me that there are still places in this country, and in this state even, where people don't regularly wear their seat belts in the car. How is that not ingrained into the psyche of every single child that grew up in the Buckle Up! era? 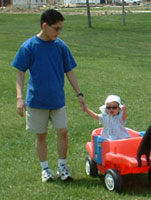 ♣ I'm taking today off to help balance out the overtime of the past couple weekends. Tonight I'll be going down to Manassas to fix Ben's computer since he downloaded some kind of malware onto his computer and now boobies pop up at random intervals. Tomorrow, we'll all go to Maryland to do Halloween-y stuff with Spellerbergian tykes, and I'll be back on Sunday, rested and ready to write Monday's update.