Senior figures admitted that the BBC is guilty of promoting Left-wing views and an anti-Christian sentiment. They also said that as an organisation it was disproportionately over-represented by gays and ethnic minorities. It was also suggested that the Beeb is guilty of political correctness, the overt promotion of multiculturalism and of being anti-American and against the countryside.

However, the summit on impartiality failed to find conclusive evidence that the BBC clubbed baby seals, took your lunch money, or voted Independent in the 2000 Presidential election. When asked which other news organizations might hold some sort of bias, chairman Michael Grade said, "We think something fishy is lurking under the bonnet at FOX News. They're up to their wellies in right-wing spirit."

Boy Scouts in the Los Angeles area will now be able to earn a merit patch for learning about the evils of downloading pirated movies and music. Unlike a merit badge, an activity patch is not required to advance in the Scouts. Instead, they are awarded for various recreational and educational activities, such as conservation or volunteering at a food bank.

Even though it's not a full-fledged merit badge, this will probably be one of the most boring Scout activities in the history of Scout activities. You can trust my expert opinion because I earned the Farm Mechanics merit badge. It's good to see that Scouts are learning about topical issues for the 21st century -- downloading is bad, as are gay people, athiests, and anyone who doesn't know all the words to "Do Your Ears Hang Low?".

I'm still amazed by the fact that the industry believes that movie downloading is so prevalent. The size and quality of the downloads means that it's almost always worth taking five minutes to rent at a video store or order on Netflix. College students are probably the only segment of the population that downloads and watches movies regularly -- I bet The Evils of Internet Pirating will be part of every university's core curriculum by 2010. 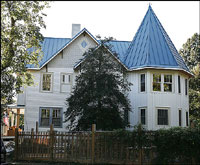 "I think Del Ray is all about people and their front porches. That's why we loved it," Carroll said. "I felt if we let him do this, if we all just walked straight into our living rooms, besides having architectural ramifications, it would have cultural ramifications for the community. It would have taken away what makes Del Ray Del Ray."

This lady blocked the expansion on one of those tiny Del Ray bungalows with the ridiculous anthropologic reasoning above, that sounds more like a really bad entrance essay on a college application than a legitimate quality of life issue. Now, I think McMansions are just as ugly as the next guy, but there's a line between preserving the neighbourhood and sticking your nose in other people's business. This was an addition on an existing lot, not two lots razed and rebuilt à la gaudy, and it was on a 1000 square foot house holding a family of five that couldn't afford to move to a larger place. Carroll didn't even live on the same street as the modified house (she lived behind it), and she doesn't live there anymore, but continues to protest it from Connecticut. I'm glad the owner of the house decided to hang a turret off the back of house as a big "F U" to all the neighbours.

Is it just me or is that turret making the house sink?

It's only indecent if it's a man

Police are still trying to figure out who to charge