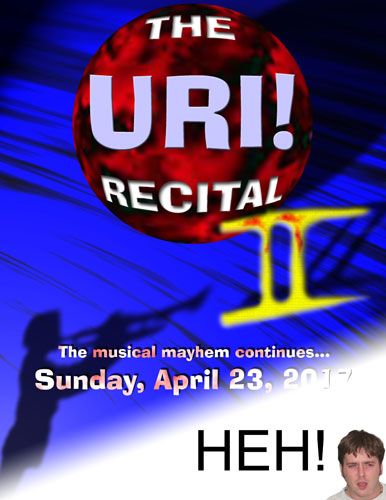 Can you believe that it's already the end of April 2011, or that ten years have passed since I was an undergrad? It's very true that time flies like a banana, when thrown by a monkey. Once the recital had ended, there was nothing else to do but lounge around waiting for grad school to start (This was helped by the fact that I was only taking a bare minimum of 12 credits in that last semester, and I didn't even attend the sole non-music course once I'd established an A). It was also during this period that I started looking for the next big project and turned this website into a blog.

The final piece on the recital, not including the obligatory encore march, was a three movement work called Olio. It featured a completely separate core of trumpet players, including the famous Jason Mirick and nearly as famous Dr. Allen Bachelder (subbing for the rock star, Andrew Simmons) since all of the earlier trumpet players were out at Top of the Stairs drinking after second intermission.

♠ Olio was one of the first commissions that actual saw a live performance (in my sophomore year), and I was in that dangerous composer phase where I expected that every performer was as good as the ones in my head. As composers mature, they begin to realize that the players in their heads could kick any real player's ass at Festival, and the complexity of their music softens sufficiently. Some composers never realize this and have to pay to get their music performed.

♠ The second movement of this piece was based around a Bb vamp with quartal chords (quards). I had to get creative with the sustained bass line and breathing, because no one had invented a tuba that converted carbon dioxide into oxygen yet. 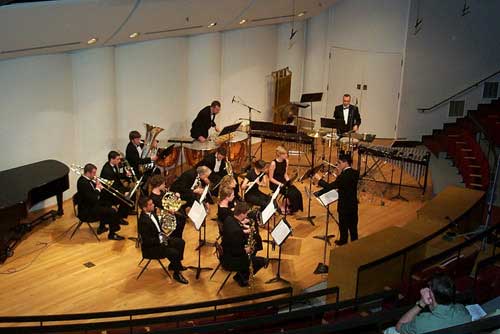 ♠ The genesis of this piece was a percussion recital, so there's random percussion stuff all over -- this is intentional and not an attempt to use every single drum patch on the MIDI keyboard. The vibraphone solo in this movement never came out correctly.

♠ I had not yet been exposed to Les Miserables when I wrote the oboe solo here. Apparently, there are only so many ways you can rearrange notes in music.

Police dress up as doctors to test citizens