Arkansas Travelogue, Part I of II

or maybe "of III", depending on schedules, popularity, verbosity, and line breaks 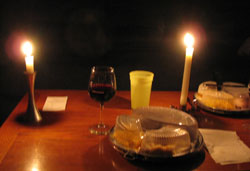 Our trip to Arkansas started off inauspiciously with a power outage during our designated packing period. Unlike people living in the PEPCO fiefdom, power outages are rare in our neighbourhood because of the combination of Dominion Power and underground power lines. We made the best of a bad scene by lighting enough candles to make our home look like the nerve center of an up and coming cult and eating in with take-out from Boston Market (quarter dark, with mashed potatoes and gravy, and macaroni and cheese).

We drove to Dulles Airport the next morning (because a three day stay in the economy lot is still cheaper than the overpriced airport cab monopoly with the illogically abbreviated website, washfly.com, which doesn't make me think of ground transportation in the least bit). Security was painless, as it always is at Dulles before 7 AM, and after skillfully ignoring the temptation of a 500 pound Chipotle spicy burrito for breakfast (really, who eats it that early?) we made it to our gate with time to spare.

After a brief layover in Atlanta with a greasy Southern breakfast, we arrived to the mild climate of Little Rock, Arkansas, where we joined up with a few other out-of-towners and ended up with a brand new Nissan for our rental car. We had a brief adventure searching for drink supplies in the last wet county before a veritable alcohol desert, and then hit the road to the sound of country songs from the 90s, and radio advertisements for Camouflage Caps ("so no one can see what you're thinking!"). 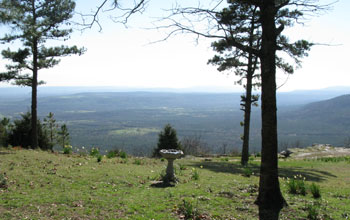 In just under two hours, we had passed Toad Suck Park and arrived at Mt. Nebo, Arkansas, where the wedding was to be held. We had rented a private cabin for 6 on the very top of the mountain, and were greeted by a wonderful view from our screened-in porch. We were right on the rim of the mountaintop, so a steep decline lurked just out of range (topographically speaking -- this is not foreshadowing).