Part I of IV 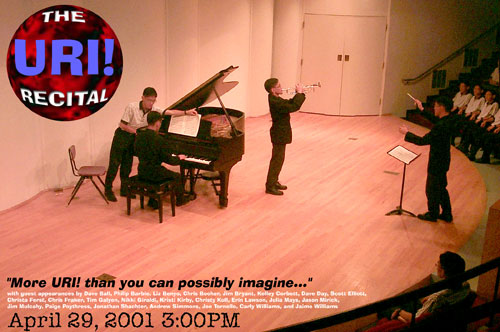 This Friday marks the 10th Anniversary of my undergraduate recital, and seeing as how my daily updates are starved for content more often than any given page of eHow.com, I thought I would spend the next few days doing an indulgent Behind-the-Scenes, Where-Are-They-Now, Blu-ray-Edition-With-Deleted-Scenes retrospective on the whole affair.

My recital was one of the few instances in life where I actually displayed qualities that could be mistaken for ambition, which is why I like to pull it out of the closet every few years and parade it around like a six-year-old son who just won a Halleys Comet trivia championship.

By the numbers, The URI! Recital involved 24 musicians, 3 stage hands, 9 original compositions, 15 minutes of the Arutunian concerto, 8 months of planning, 2.5 hours of performance (with two intermissions), a 17 page program and a budget of about $350. It also instilled in me the critical career skills which I still rely upon today, notably, the ability to use Photoshop for funny pictures, and the ability to buy gift certificates on Amazon.com (musicians work for cheap when they don't have a degree yet).

Although bits and pieces of the recital recordings have appeared on this site in the past, I'll be posting full-length MP3s of some of my favourite songs this week. The first one is Vanishing Point:

Featuring 3 trumpets, 3 horns, 3 trombones, 2 tubas, and 2 percussionists, my goal here was to treat a brass ensemble as a sectioned jazz ensemble and show that an unwieldy ensemble full of muddy brass instruments can swing surprisingly well. Here are a few other fragmented thoughts about this piece: 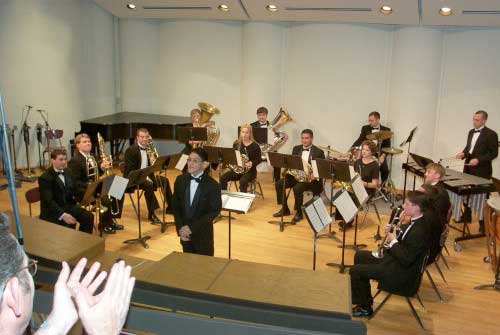 ♠ The chord progression here is based on the song, Bernie's Tune.

♠ Philip Barbie performed the trumpet solos here, because I'm not a fan of improvisation and I knew he wouldn't do anything retarded.

♠ The decision to write a jazz piece for brass was actually very in line with my education: jazz was my go-to language for boring writing assignments, and when a composition professor would want me to compose another sonata or do something with more wrong notes, I would always fall back on jazz as a passive-aggressive way to bring the assignment back into the realm of "music people might actually want to listen to". I also have a three movement jazz sonata and a three movement jazz suite for brass quintets in my repertoire.

♠ The only reason there are two tubas is so that one can always be breathing. Walking bass lines require oxygen.

♠ Towards the middle of the piece, the

original horn line (396KB MP3) required a lot more finger-flexing, and was rewritten the night before the performance to be less difficult. Even with the new line, a beat goes missing somewhere in the performance, and the drummer ends up on 1 and 3 for a few bars instead of 2 and 4.

♠ I didn't want a guitar mucking up the works, and the stage was too small to roll out the piano, so chord innards were provided by a vibraphone player. This gave it a unique sound, but still ended up a little too muddy for my liking.

♠ This was one of the pieces I conducted -- even though jazz ensembles generally don't need conducting, I was worried that the piece would just get slower and slower without me, and I would have to come out of the wings with a cowbell and start yelling, Chip McNeill style.