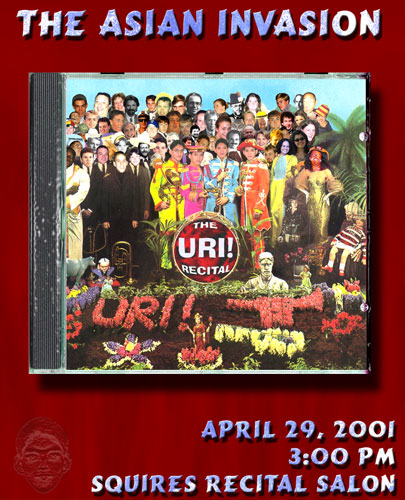 By far, the poster with the most longevity and popularity was the Asian Invasion poster, which still hangs in my office at work. The creation of this poster required me to expand my massive collection of Dave Matthews and Canadian Brass CDs with my first and last Beatles purchase ($8.99 in the bargain bin at the Christiansburg Walmart).

After reshuffling the flowers to spell URI! and a trumpet, I splattered the background with friends and professors from high school and beyond. You can even see the plastic cow we put on Jason Chrisley's birthday cake on the left side below Mike Robb. This poster, and all of the rest from the complete series found a second life in Tallahassee where I used them to decorate the cinderblock walls of Parkwood Apartments. There's not a lot else you can do with cinderblocks.

Besides designing posters, crafting intricate stagehand charts and graphs, and making sure that Kelley got to rehearsal on time, I also tried to be involved in every piece on the program. Although it was a composition recital, I figured that it would be more over the top if I conducted four songs, turned pages on anything with a piano, and performed at least one song on my trumpet.

Although I had played trumpet since the fifth grade, I was never more serious than an average performer. Music was a member of The Arts where it didn't matter if you had painted all of your leaves brown because that's how they look with Red-Green color blindness, and it was only happenstance that I rolled off of the trumpet shelf and onto the composing shelf. I haven't yet decided if The Arts in this metaphor are a particle board bookcase at a yard sale or the Antarctic region under the CFC hole, but either should suffice for your mind's eye.

Despite my continuing preference for "playing" over "practicing", I did manage to buckle down and practice heavily for the one trumpet piece I performed on the Recital -- that behemoth of Romanticism excesses, the Arutunian Concerto.

♠ The section in the excerpt actually turned out very well, and showed that I was a possible contender for any future Music Decathlon. The introduction got off to a rough start, after I sent the sixth note of the piece through an unexpected puberty, but I recovered nicely.

♠ As a trumpet player, my forte was always understanding and interpreting the phrasing, language, and intent of the written score. Those other intangibles like pitch, tone, and practicing more than 2 hours a day were always tossed in the backseat.

♠ I chose the Arutunian because it was long enough to show that I was seriously putting forth an effort. This is in direct contrast to my Junior Year Convocation performance where I performed a piece called Scherzo that was 1:41 in length.

♠ As the piece cranked past minute 12, I began to realize that I had indeed given this performance my all -- so much so, that I had no endurance left for the final two minutes of the piece which involved a free form trumpet-alone section of progressively higher high notes. As I tumbled off of the shelf into this cadenza (here, the shelf is made of ice), I could immediately sense that every trumpet player in the room knew I didn't have enough gas to make it to the end. Thankfully, an on-the-spot reinterpretation of the rests and melodic lines coupled with notes an octave lower allowed me to get all the way to the end with most of my dignity intact.

Walmart Could Easily Pay Its Workers $12 An Hour