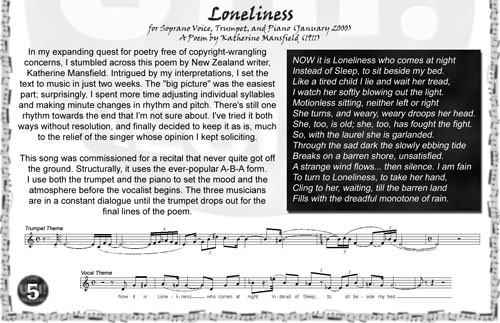 Promotional concerns for the URI! Recital took on as much importance as musical ones, since you can even make a musicologist's recital sound good if you advertise it with enough verve. The poster in yesterday's post was created with the help of Paige, who took fifty pictures of me in various poses which I then Photoshopped together. Since this was one of my first photo-editing outings, my original idea of showing a huge trumpet choir on stage was nixed when the shadows became too difficult to manipulate.

The first promotional poster went up in August before the recital, and a new one came out each month, like a comic book for music nerds. I used the posters to learn all about Photoshop, although I still probably don't do things the easiest or correct way. By the end, posters had simulated flames and crazy effects, and had there been another two months to go, I'm pretty sure the next posters would have required 3D glasses.

The programs were even more ostentatious -- rather than the standard department template with a back cover calendar advertising the upcoming sackbut concert and an advertisement for incredibly useful music fraternities, my program spanned 20 pages, contained excerpts and explanations of the music, and even ended with an order form where you could buy URI! Recital refrigerator magnets. Thankfully, no one ordered anything, since I hadn't actually made any. And while all of the other music majors were at home for spring break, making enough money at Subway to cover their final meals at Owens, I was holed up in a conference room, sorting Kinkos copies and binding them all together with one of those plastic binding machines. 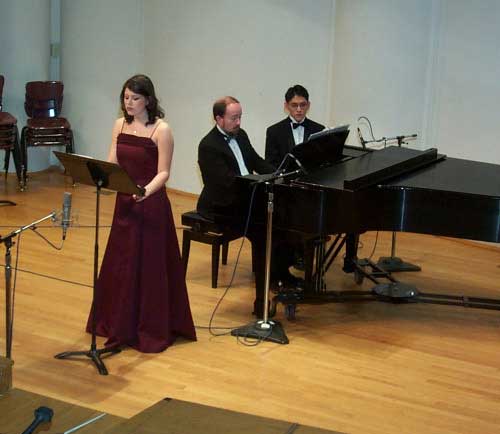 Today's musical download is Loneliness, a song for voice, trumpet, and piano. For quite some time, my vocal specialty was deeply depressing songs beyond the reach of copyright law, and this 1911 poem fit the bill perfectly.

♠ I love both the vocal and piano lines in this song. The trumpet part flat out fails -- I would rewrite it today for a less voluminous sound like an English Horn, but this piece was a commission for a trumpet/voice recital, so the best I could do was to not use the trumpet for the last third of the song. Even in the recording, you can tell that it overpowers the other parts.

♠ Also, if you write a trumpet part with quintuplets, your trumpet player is going to be all over the place on the recording. Damnit Shac!

♠ This piece had the misfortune of bonus exposure when I was at Florida State for grad school. During one of their composition professor searches where they eventually hired Dr. Callender, the faculty asked composers to bring in an "older work with obvious deficiencies" so it could be evaluated one-on-one with the candidates, and the faculty could see their teaching styles. This one-on-one morphed into a giant congregation of faculty and grad students, where they ended up ONLY using Loneliness because it "had some great obvious problems in it". As such, we got to hear it on loop for about two hours while various traveling composers tried to win a new job by pointing out its faults.

Mansion that may have inspired The Great Gatsby torn down