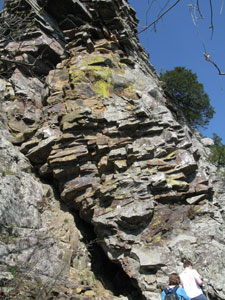 Friday night in Arkansas was an early night, with an informal Southern Barbeque on the edge of a cliff, overlooking the scenic lake at Dardanelle, and the not-quite-as-scenic nuclear power plant puffing steam clouds of serenity into the night sky. Rebecca got to catch up with all of her college friends (who are used to traveling long distances since they all went to school in Iowa). After a day of travel and dodging the large herds of deer on the mountaintop, no one in our cabin made it past 11 PM for any wild partying.

The next morning, we decided to hike the trail that stretched for four miles around the edge of Mt. Nebo, appropriately named The Rim Trail. Hiking on a rim is definitely the way to go, because it's mostly flat and there's always a nice view off to one side. Later in the day, we also did a waterfall hike that was quite short but forced us nearly straight down the side of the mountain, and then back up again. 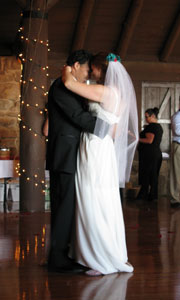 The feature event of the weekend was the wedding of Baylis and Richie, which took place at 4 PM on Sunset Point, a promontory that curiously faced southwest (Arkansans probably subscribe to the magnetic north). The ceremony was short and sweet, with no accidental trips over the rim, and the reception took place in an old wooden pavilion on yet another cliffside. A large number of Richie's family was able to make it up from El Salvador, so toast-time became a game of "how many sentences can I get through in Spanish before I turn the mike over to the translator". The translator won.

Following a light brunch the next morning, we returned to Little Rock around midday and had lunch at The Flying Saucer, a bratwurst place on the Arkansas River. I had a roast beef sandwich with Guinness au jus dipping sauce while we enjoyed the pleasant 70 degree temperatures, and then found out that almost every flight out of Little Rock was delayed. Our 5:26 departure crept forward in thirty minute increments until it finally came to rest at 7:55. This pushed our arrival time in Atlanta after 10, and made us miss our connection back to the fake South of Virginia. This must be a regular occurrence now, because you can now claim meal and hotel vouchers through automatic scanning booths throughout the terminal, probably so you don't have the opportunity to yell at anyone.

We arranged for kitty-care through Anna, and then spent the night (a total of 5 hours) at a decaying Country Suites, only to get back up at 5 in the morning to catch the next connection to Dulles. We didn't even have time to use up all the money on our food vouchers, since $12 in greasy eggs and bacon probably wouldn't have made for a comfortable plane trip. I tempted fate anyhow with my $5 "bacon omelette combo", which consisted of a lattice of tightly-woven bacon wrapped in egg product with tater tots on the side.

We got back to Dulles without further drama and were home by 11 AM on Monday. Now it's time to plan the next trip, which will be Sam and Kristen's wedding in May!