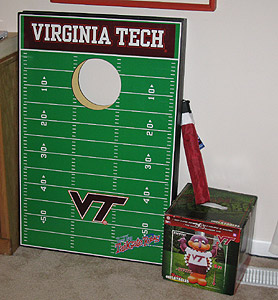 ♠ Despite being sick for the first few days of the week, I had a successful thirtieth birthday and received good loot. My presents included, but were not limited to, the new Muse CD which I'm listening to as I type this, hardcover editions of the d'Aulaires mythology books, the new Mario & Luigi DS game (which I may have purchased for myself), and a Virginia-Tech-themed cornhole game from my sister.

♠ The cornhole game will go well with the VT umbrella and 8-foot inflatable Hokie Bird that my parents got me. Apparently, they all needed to remind me of which college I attended, since the memory is the second thing to go when you turn thirty.

Update 2/18/2010: I've been getting mail from people asking about where to purchase the inflatable Hokie Bird. This specific one was bought at www.forevercollectibles.com -- however, they don't seem to list it on their site anymore. I'd check with them.

♠ I'm not sure when I'll have a special occasion to inflate the Hokie Bird, but we're currently planning on putting a Santa Hat on him for the winter (converting him into a holiday lawn ornament) and surrounding him with Virginia Tech lawn gnomes, of which I already own one.

♠ College merchandising has already invaded the most common day-to-day paraphernalia, like Hokie wines and UVa Enema Bags, but I think it's time to start being more creative with their outreach. Instead of buying a Hokie keychain, you should be able to buy an actual Hokie, who will come to your home between classes and make the bed, or show up in the Fall and take the SATs for you. 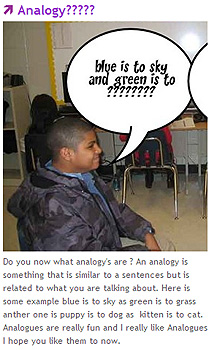 ♠ I read an article in the Post the other day about a test trainer who takes every SAT test to determine how his company's ridiculously overpriced preparation materials should be tailored. The article mentioned that analogies have not been a part of the SAT for several years now. I had no idea that such an integral and easy to mock portion had been removed. It's like -- well maybe I could explain what it's like if kids today knew what an analogy was.

♠ Plans for the weekend include steaks tonight, followed by a clandestine trip organized by my groomsmen with bacheloresque overtones, while Rebecca is off with a bunch of chicks eating cookies shaped like male genitalia. Next week will be my last week of work until Halloween week, so I'll probably be pretty busy. The quality of content here should not suffer, because I pride myself on being able to maintain consistency in mediocrity.